Check out my recipe for making Instant Pot ham! We don't make ham very often at our house because ham takes time to reheat and it's a big meal.  But, when we do, our family LOVES it!

There are several different types of ham that you can buy.  We use to buy spiral-sliced Honey Baked Hams, but they tend to be quite pricey.  You can buy boneless or bone-in hams, spiral sliced or unsliced hams, and glazed or unglazed hams.  We usually opt for the bone-in, spiral sliced hams with the glazing packet because they are so much easier to serve.  Oftentimes, with an uncut ham, we would end up with uneven slices and have come to prefer the perfectly sliced hams. 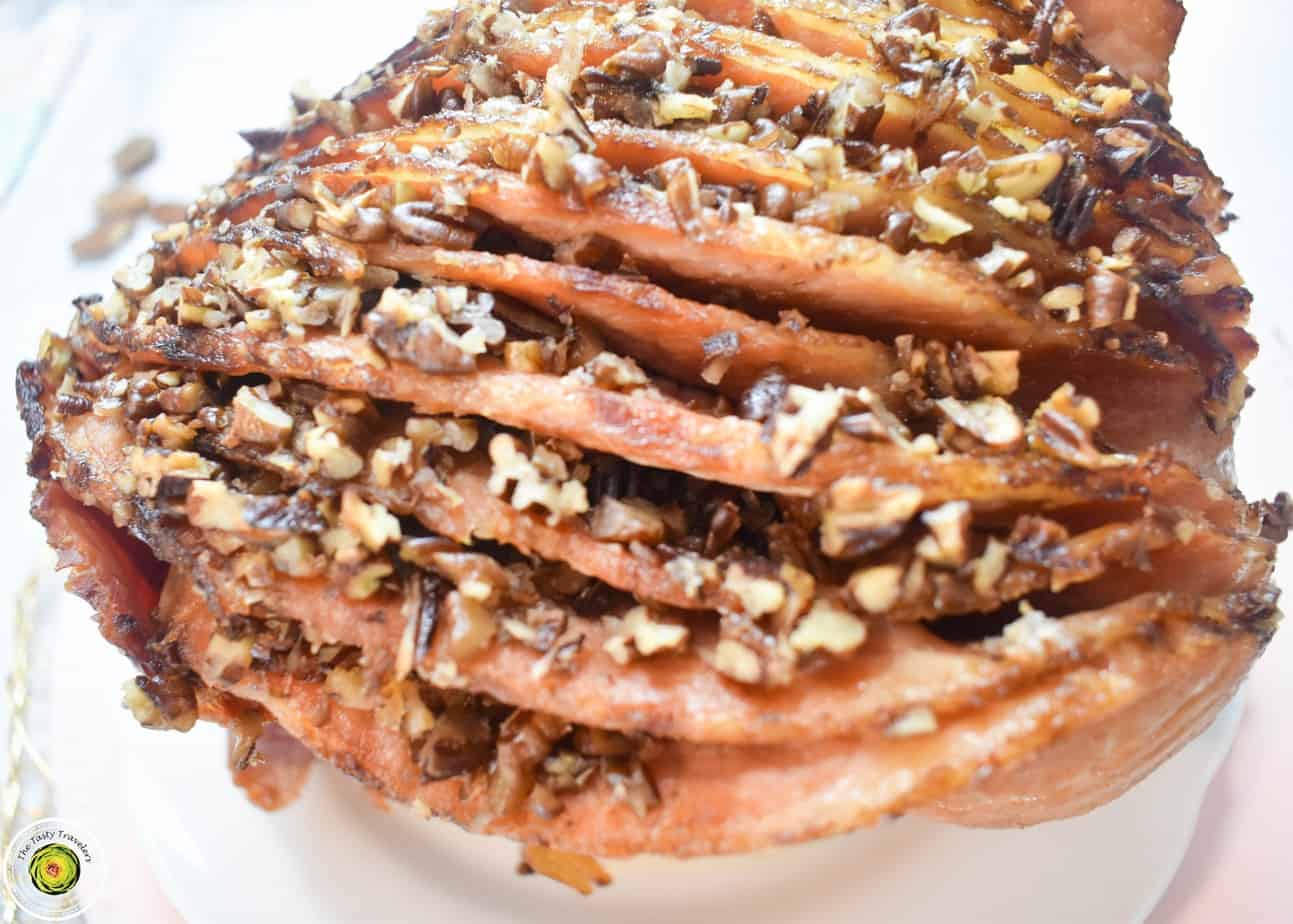 In this recipe, we opted to use an 8 pound, spiral sliced ham.  It did come with a glazing packet but we made our own glaze instead....and it was the BEST DECISION!  The final result was a sweet and nutty delicious ham that our family went CRAZY over.  My 13 year old repeatedly tried to steal slices before serving and she had 3 plates!  This is a win in my book! 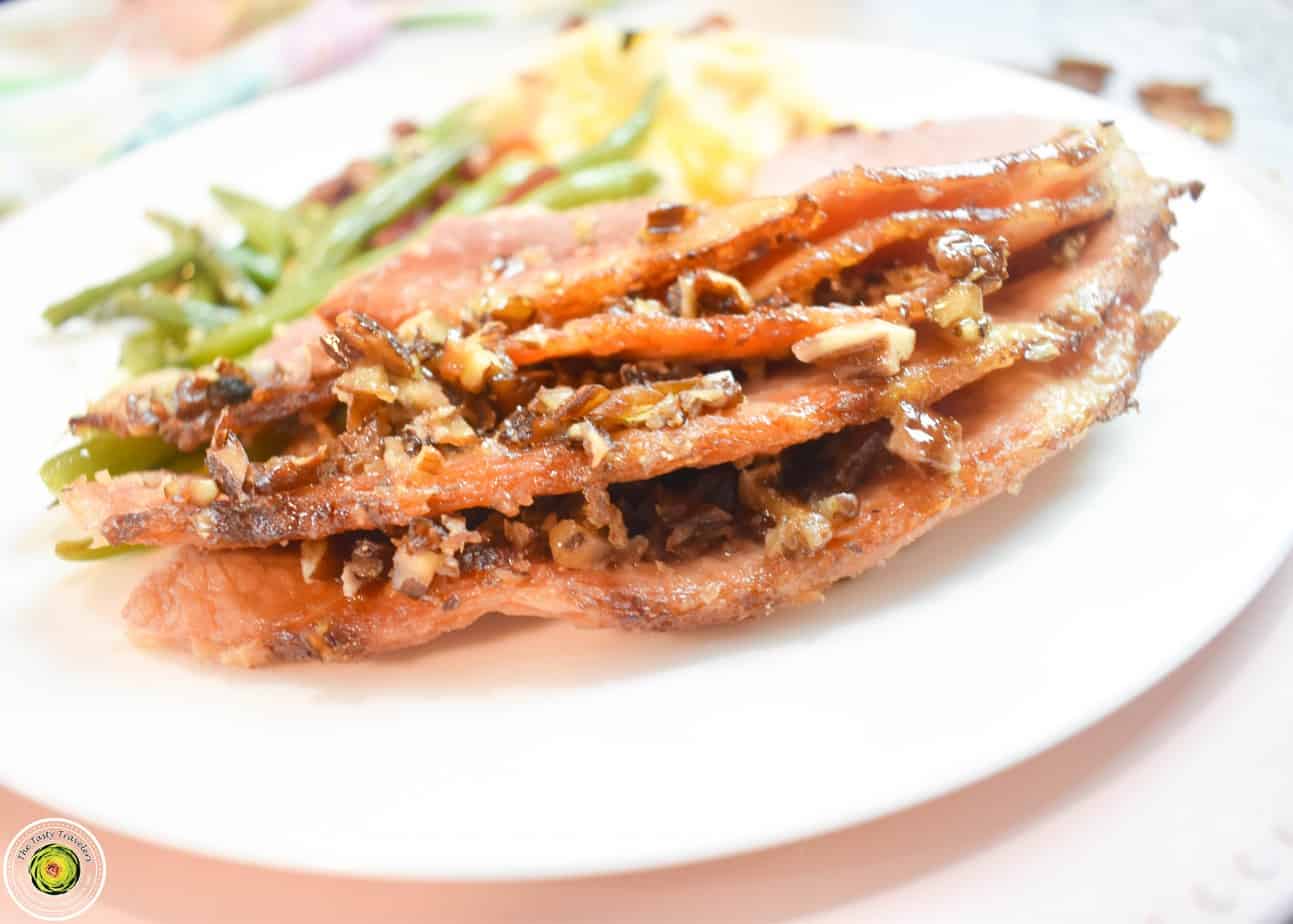 Tips for making Pecan Glazed Ham in the Instant Pot:

1.Buy whole pecans and chop them up yourself.  You'll save a bunch of money.  Either chop them with a sharp knife or throw them in your blender for just a few seconds.

3.If you are not going to be serving your ham right away, keep it in the Instant Pot with the lid closed and the power turned off.  Keeping the lid on will help to keep some of the moisture in the ham and it will stay warm.

4.Save the ham bone to use in future recipes.  There are so many things you can do with it.  One of our favorite ways to use the ham bone is to make black-eyed peas or chicken cordon bleu pasta.

5.For an 8-pound bone-in spiral ham, I used an 8 quart Instant Pot.  It was a tight fit.  If you are making anything over 6 pounds, I would recommend an 8-quart pot. 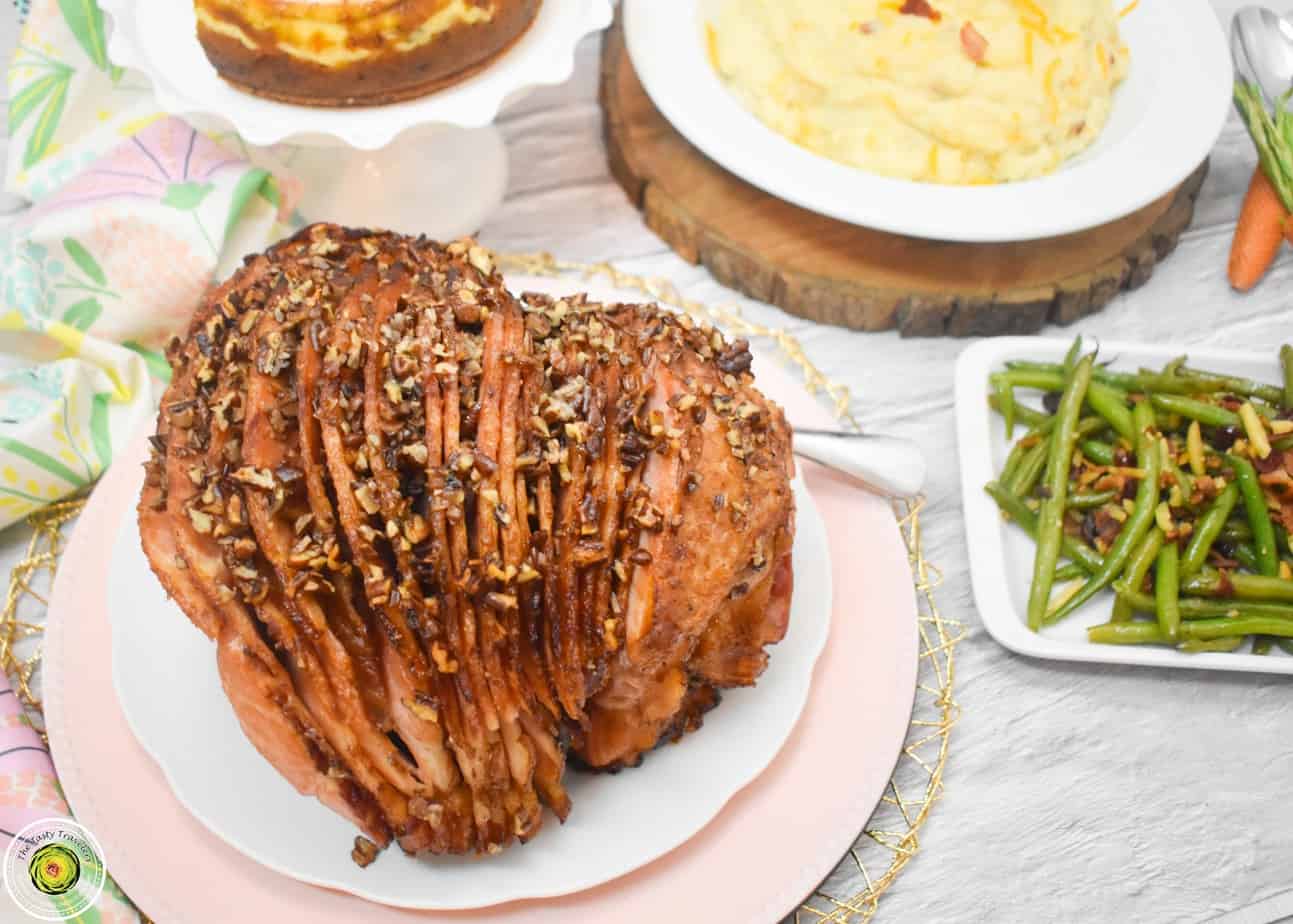 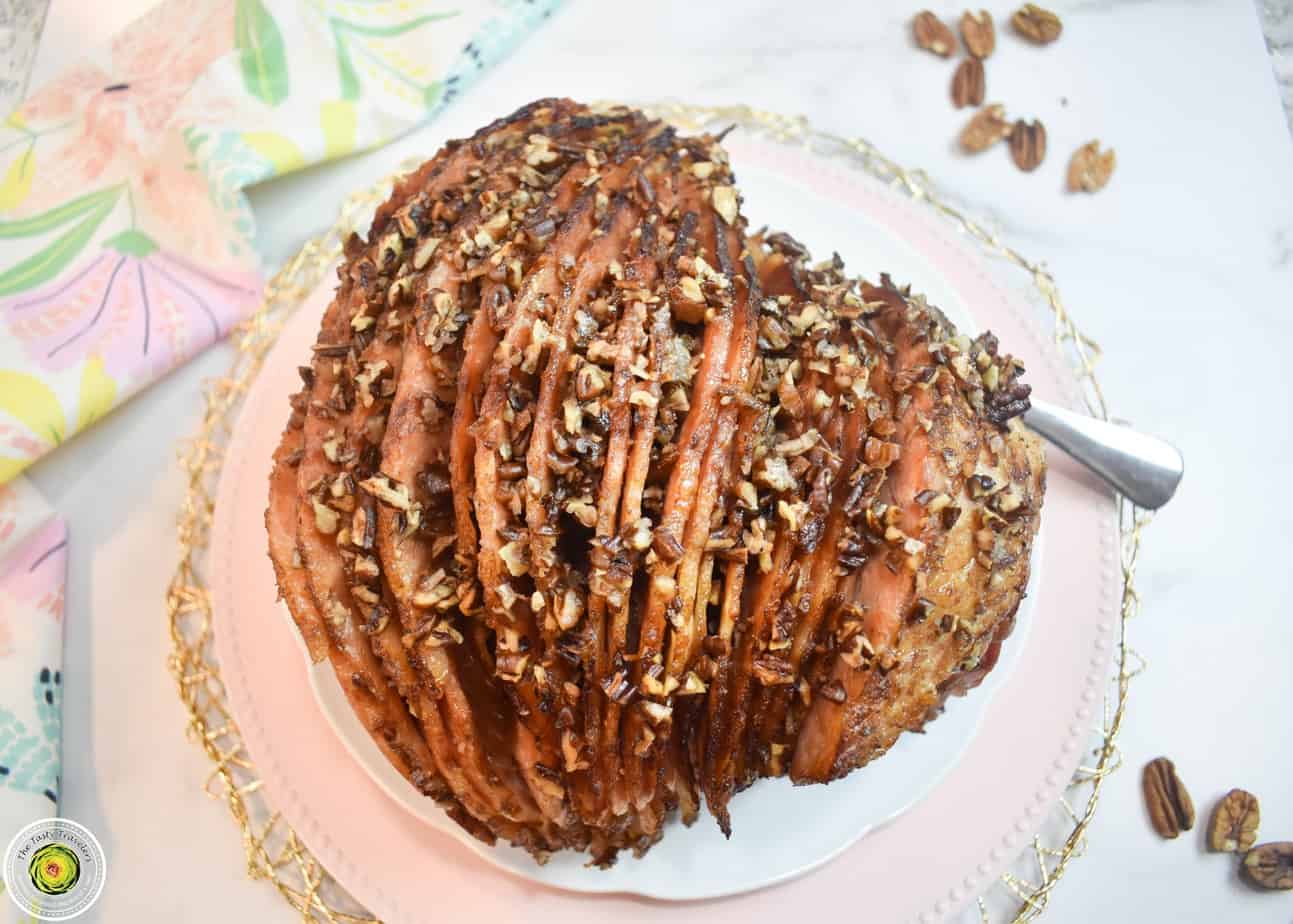 Looking for more Instant Pot recipes?  Check out some of our favorites! 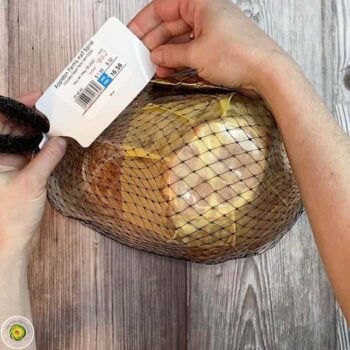 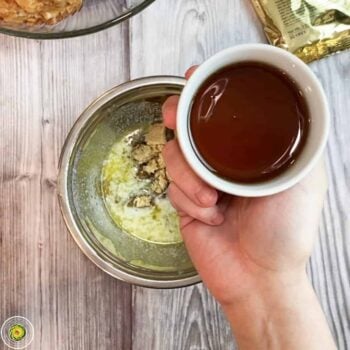 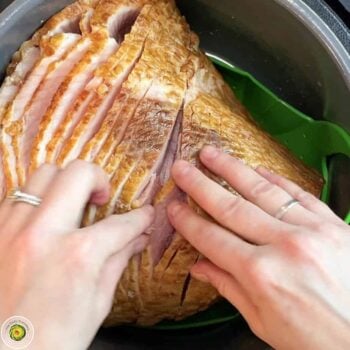 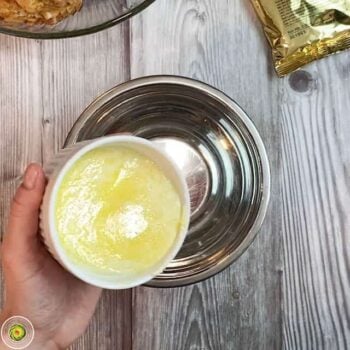 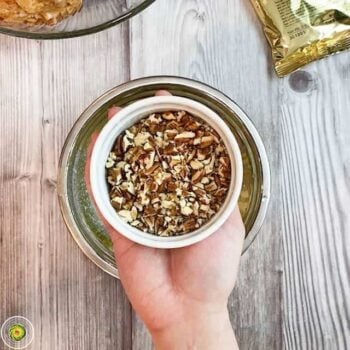 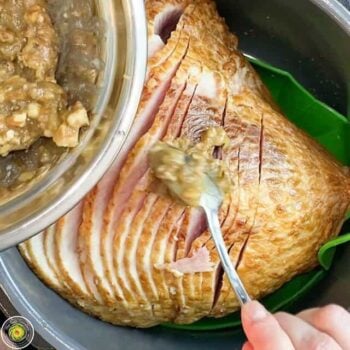 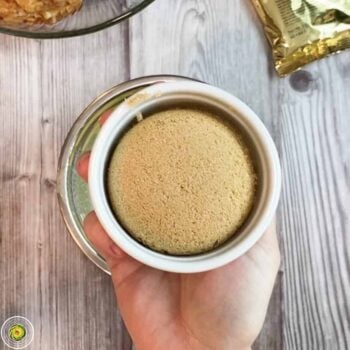 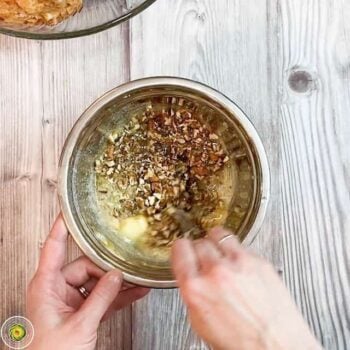 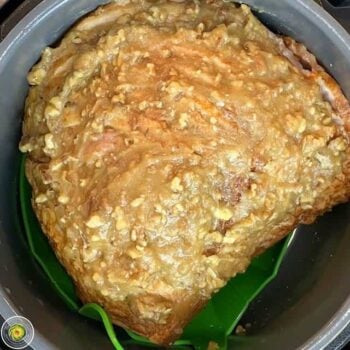 Ingredients for making Pecan Glazed Ham in the Instant Pot:

Directions for making Pecan Glazed Ham in the Instant Pot:

2.Remove ham from packaging and place in a silicone or mesh steamer basket if you have one.  If not, that's ok but it will be a little trickier to get the ham in and out of the Instant Pot.

3.If you are not using a steamer basket, place a trivet into the Instant Pot.

5.Lower the ham into Instant Pot either using the steamer handles or with your hands if you are not using a steamer basket.

6.Gently separate the slices of ham and spread the glaze that you just made onto the top of the ham, making sure to get some in between the slices.

7.Close the Instant Pot lid and make sure the valve is sealed. Pressure cook according to the weight of your ham.  This is for BONE-IN SPIRAL SLICED ham.  If you are making a boneless ham or an uncut ham, the cooking time may vary.  Boneless ham will need less cook time and bone in uncut ham will need to pressure cook for twice as long as the spiral sliced ham. 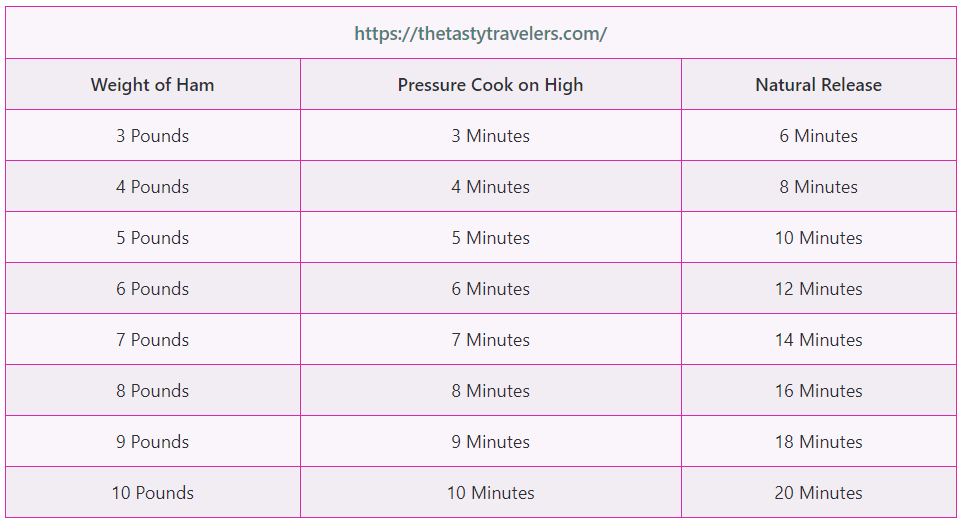 8.Once you have naturally released the pressure according to the weight of your ham, quick release any remaining pressure.  There may not be any and that's ok.  If you have a broiling lid for your Instant Pot, place the broiling lid on and broil at 400 degrees for 4-5 minutes.  If you do not have a broiling lid, you can place the ham in an oven-safe pan and broil at 400 degrees for 4-5 minutes.  Broiling is optional. 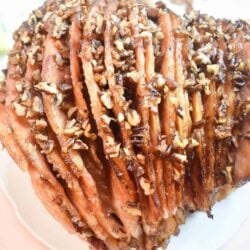 5 from 3 votes
Rate this Recipe Print Recipe Pin Recipe Save to Slickstream Favorites Saved!
Prep Time: 5 minutes
Cook Time: 8 minutes
Natural Release: 16 minutes
Servings: 8
Calories: 1328kcal
Join our Facebook GroupCheck out The Ninja Foodi Community!
Submit Your Recipe!Do you have your own great recipe that you would like to see on The Tasty Travelers? Submit Your Recipe!!