Check out our recipe for making London Broil Marinade! 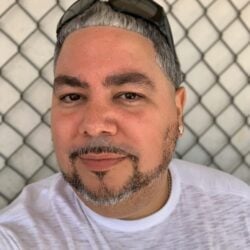 This recipe is a guest post from Luis Calderon!

Hey everybody! I'm Luis! I live in Florida with my beautiful wife and daughters! I spend much (ok MOST) of my time with my Ninja kitchen appliances! You name it...I own it....and use it multiple times a day! I love to cook, love to eat, and love to share all of my creations with you!!! I hope you enjoy my recipes as much as my family and I do!

The key to a good-tasting London broil is all in the marinade/ seasoning you choose. This recipe is an easy one with basic ingredients. So, if I had one piece of advice for you on how to make a really good London Broil...it would be DON"T SKIP THE MARINADE!

The marinade does two things. It adds awesome flavor to the beef but it also helps to tenderize a traditionally tough cut of meat. If you skip the marinade, your meat will be lacking in flavor and it will not be as tender as you'd like. 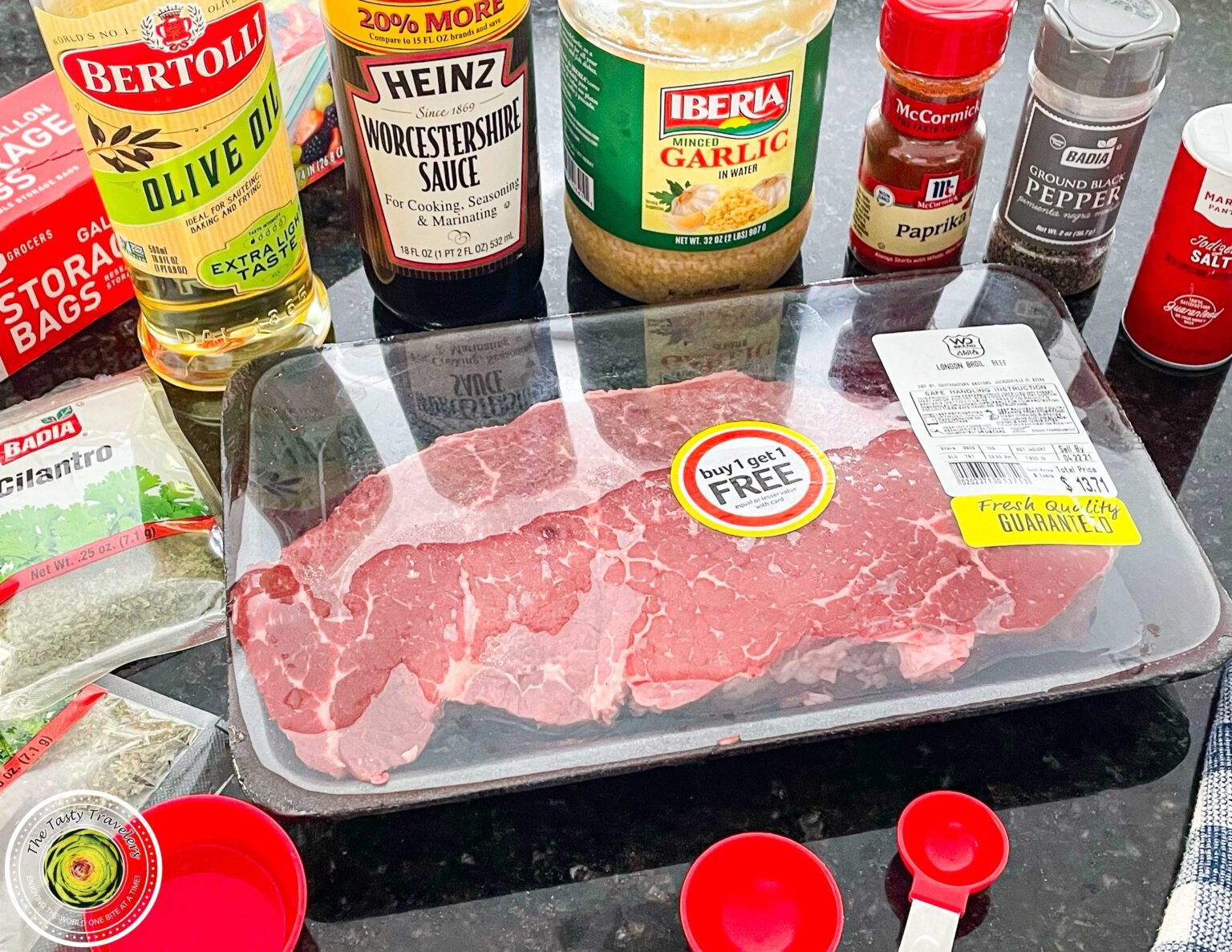 Once you have your marinade prepared, and you are ready to start cooking, be sure to check out our recipe for how to cook London Broil using the Ninja Foodi Grill (or any grill). Click here for the recipe! 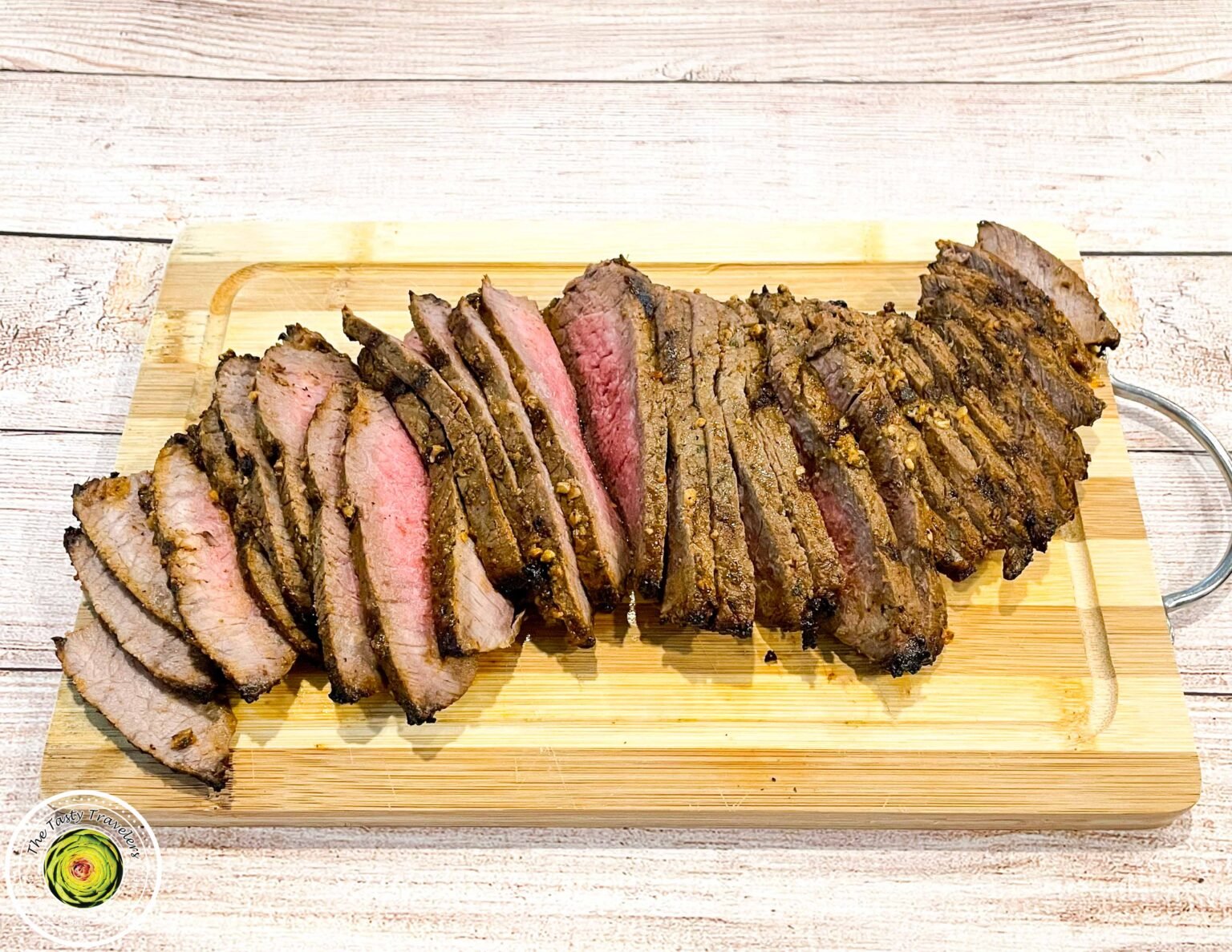 What cut of meat is London Broil?

London Broil is flank steak. Depending on where you purchase your meat, it will either be labeled as London Broil or as Flank Steak. They are the same cut of meat, just different names.

Is London Broil a tough cut of meat?

Generally speaking, yes, London Broil or Flank Steak is a tough cut of meat and is best served after marinating to tenderize it. The longer you marinate the meat, the more tender it will be. Cutting the meat against the grain will also provide a more tender cut of meat.

To ensure that your London Broil is tender, you can use a meat tenderizer or mallet before cooking it. Be careful not to use the meat mallet too much as you don't want to flatten the meat out too much. Using a meat tenderizer to poke tiny holes into the meat is a great way to tenderize it as the marinade will really soak in. (Some grocery stores will run the piece of meat through their tenderizer for you for free, all you have to do is ask!)
If there is salt in the marinade it will soak into the meat and make it extra tender. The longer you marinate the beef, the more tender it will be...and it adds great flavor too! Once the London Broil has finished cooking, let it rest for 5-10 minutes and then cut it against the grain. Thin slices are recommended.

Can you marinate London Broil too long?

Technically yes. We recommend marinating London Broil for at least 2 hours and up to 24 hours. The longer you marinate the London Broil, the longer the marinade has to soak into the meat. So, if your marinade has salt in it, which this recipe does, the meat can get very salty if the marinade is left on too long.

Can I cook the London Broil with the marinade still on it?

Yes, for this recipe you can cook the London Broil with a little extra of the marinade still on the meat. However, if you are using a different marinade that has a lot of sugar in it, it is recommended to remove any excess marinade as the sugar will be quick to burn. It is NOT recommend to apply additional marinade after the London Broil has cooked since the raw meat has already been in contact with the marinade. 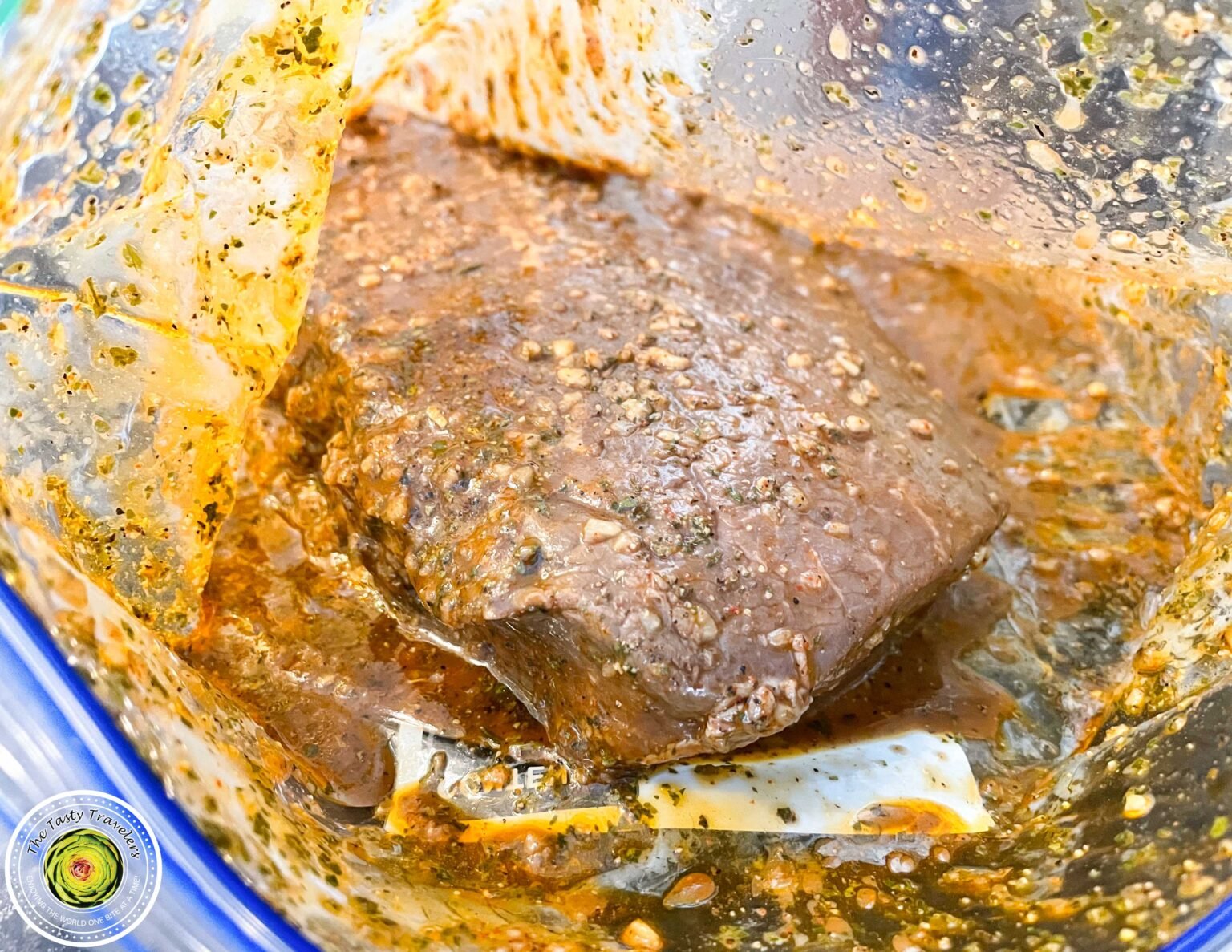 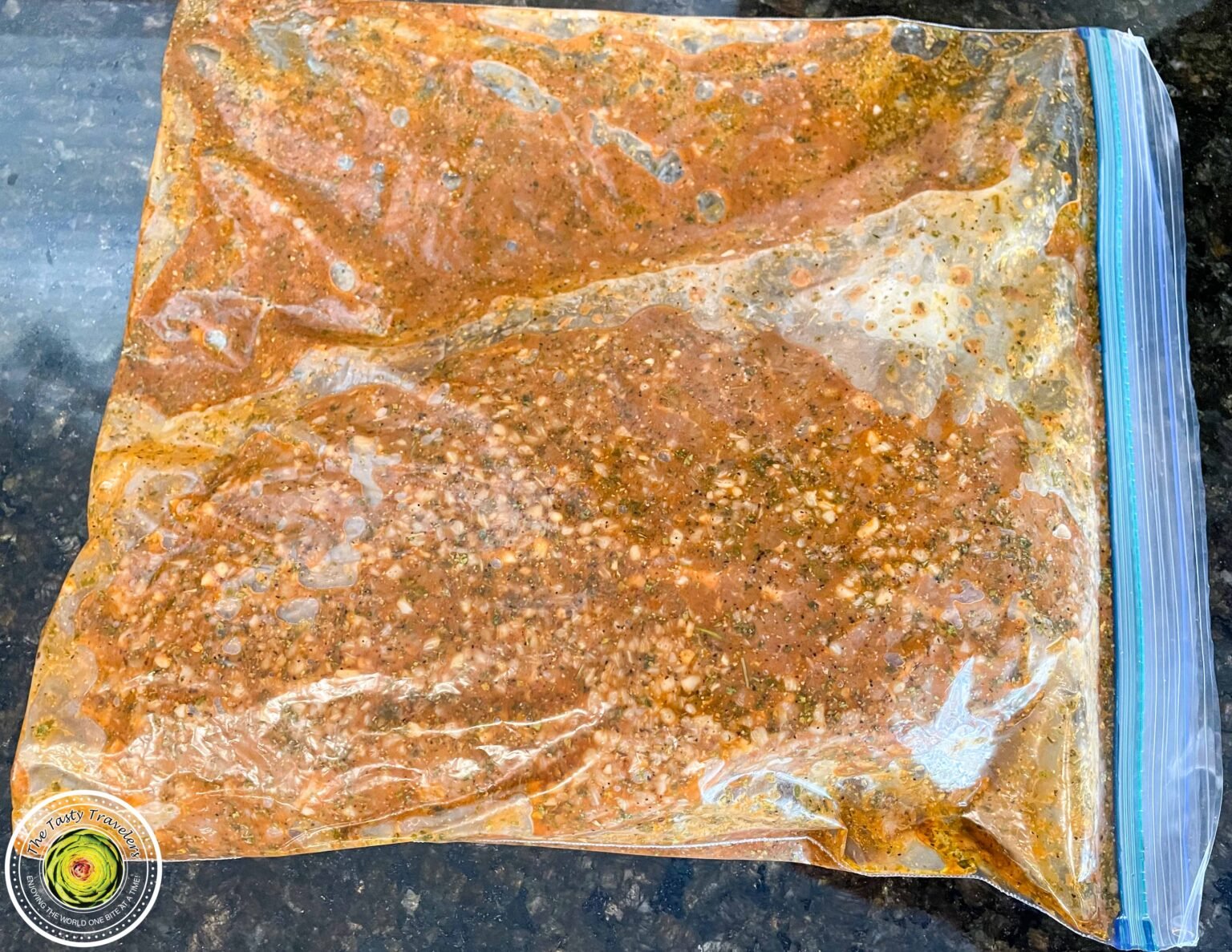 Olive Oil- Canola or vegetable oil can be also be used.

Worcestershire Sauce- If you don't have any Worcestershire sauce, you can use balsamic vinegar, soy sauce or, a mild barbeque sauce instead.

Garlic- Be sure to use garlic and not garlic salt or powder. The powders do not provide quite as much flavor as the minced garlic does.

Cilantro- Fresh or dried will work for this recipe. If you don't have cilantro, you can use extra parsley instead.

Parsley-Fresh or dried will work for this recipe.

Salt, Pepper, and Paprika- Feel free to adjust the amounts based on your own preferences. It is NOT recommended to remove the salt from this recipe as it helps to tenderize the beef. 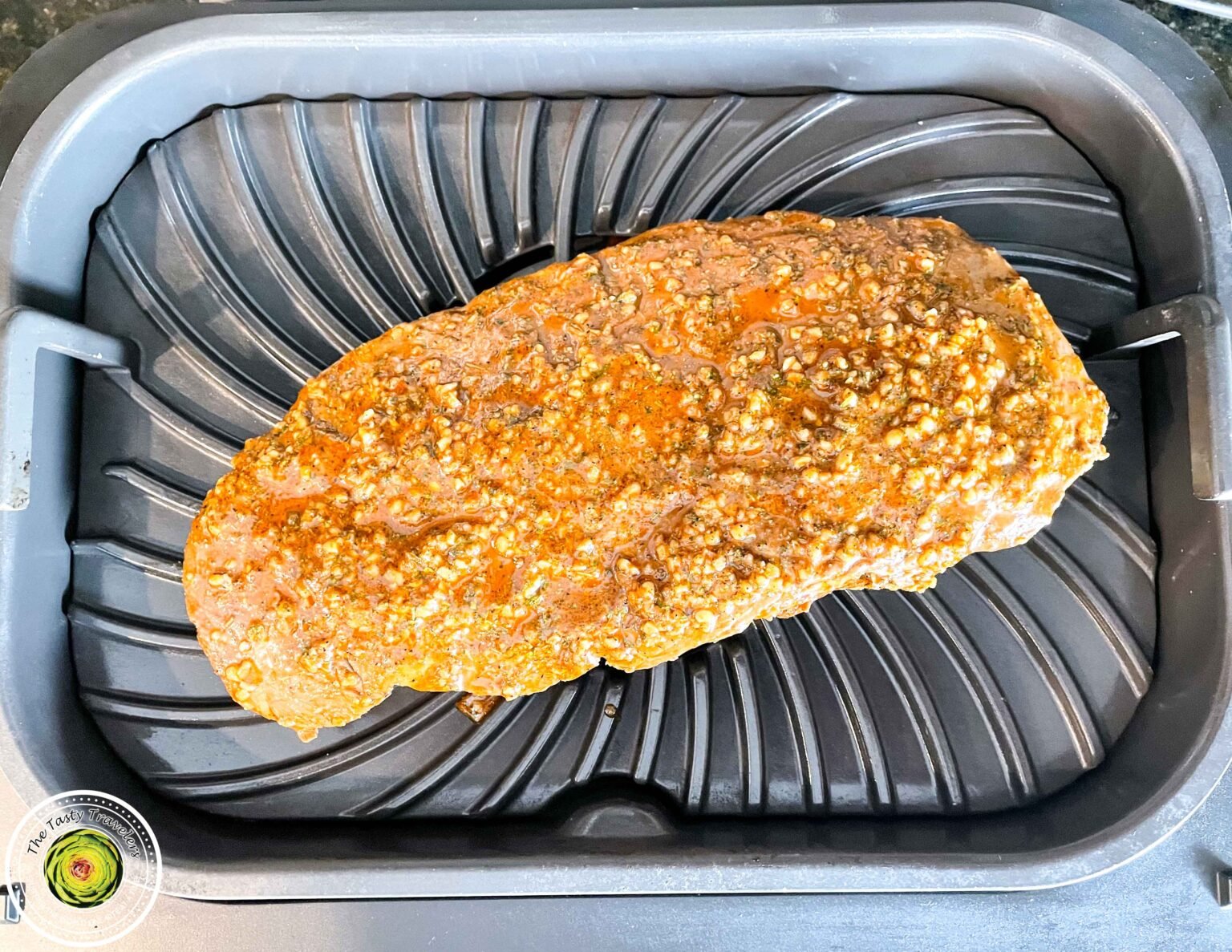 1. In a ziplock bag, add the London broil and all seasonings. No particular order required.

2. Refrigerate for at least 2 hours. The longer the beef is in the marinade, the better. You really want the flavors to soak into the beef. The marinade helps to tenderize the beef as well. 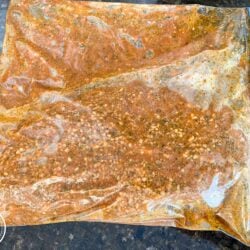 No ratings yet
Rate this Recipe Print Recipe Pin Recipe Save to Slickstream Favorites Saved!
Prep Time: 5 minutes
Refrigerate Time: 2 hours
Total Time: 2 hours 5 minutes
Servings: 4
Calories: 142kcal
Join our Facebook GroupCheck out The Ninja Foodi Community!
Submit Your Recipe!Do you have your own great recipe that you would like to see on The Tasty Travelers? Submit Your Recipe!!