Check out our recipe for Ninja Creami Coffee Smoothie Bowl!

A really great thing about smoothie bowls is that you can customize literally every single ingredient to your liking! You can make it as healthy, or not, as you would like just based on the ingredients that you add to your smoothie bowl. 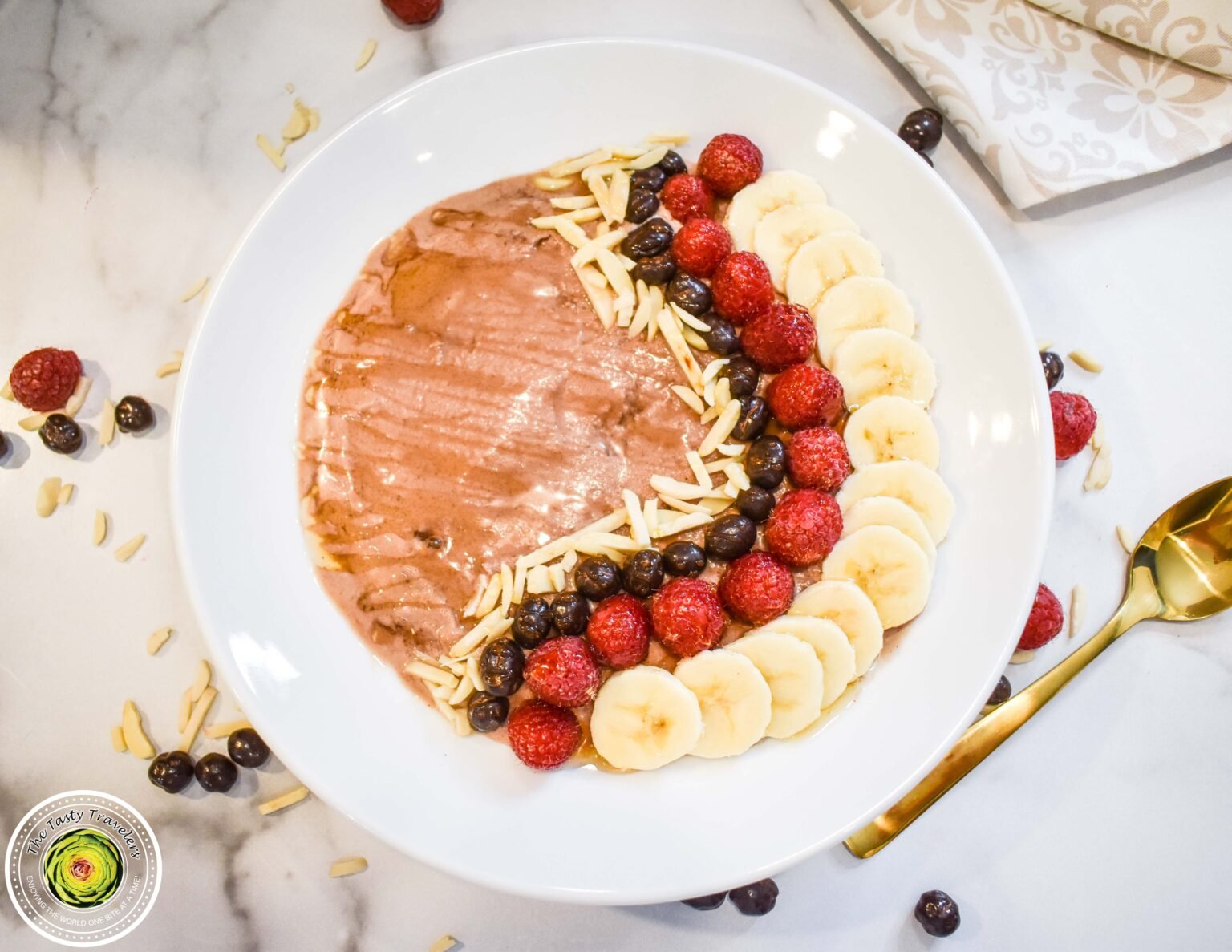 For this version of the smoothie bowl, we took several breakfast ingredients like coffee and bananas and added them in. The result is a super thick and smooth breakfast smoothie bowl!

Another really great thing about making smoothie bowls is that it's a great way to clean out the refrigerator since you can add just about anything that you want! Almost any fruit or vegetable can be added...and most of the time you can't taste the vegetables in the smoothie bowl! 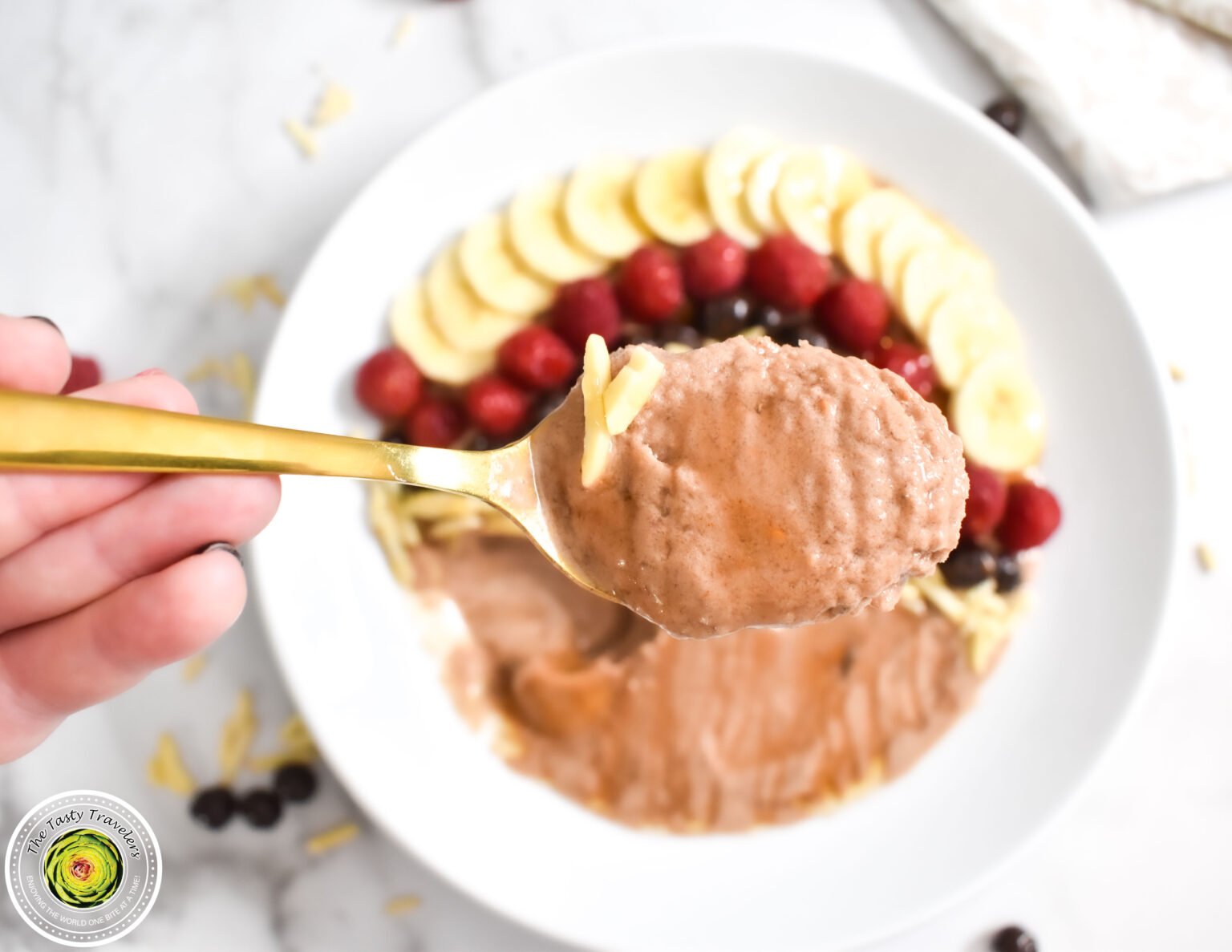 Can I add protein powders, matcha powder, collagen, etc. to my smoothie bowl?

Yes, you can add your favorite powders to the smoothie bowl. Reduce the amount of liquid added to the recipe a bit to allow for the extra powders to be added in. You can also add in things like kale or spinach to provide extra nutrients.

How do I get a creamier smoothie bowl with the Ninja Creami?

If you have made a smoothie bowl and it just isn’t quite as creami as you would like, you can very easily get it super creami by using the re-spin function on the Ninja Creami. Simply place the pint into the outer bowl and snap it into place. Choose the RE-SPIN function. Once the cycle completes, remove the pint and enjoy! Your gelato should be nice and creamy again. ***Use re-spin on already spun ice cream. If the ice cream has been spun and then frozen again, do not use re-spin, Instead, use the original process (ice cream, gelato, etc.)

What type of coffee should I use?

You sure can! But…you will need to use 2 pint containers instead of one. You always want to make sure that the pint containers are only filled up to the max fill line and not any more than that. In order for the smoothie bowl to turn out creamy, it needs to be mixed by the machine after freezing. If you overfill the pint, the machine is going to have a hard time mixing it and the result will not be as expected. It’s ok if you go over the max fill line a little bit when adding in the mix-ins after the smoothie bowl has already gone through the smoothie bowl function.

How long can I freeze my smoothie bowl? 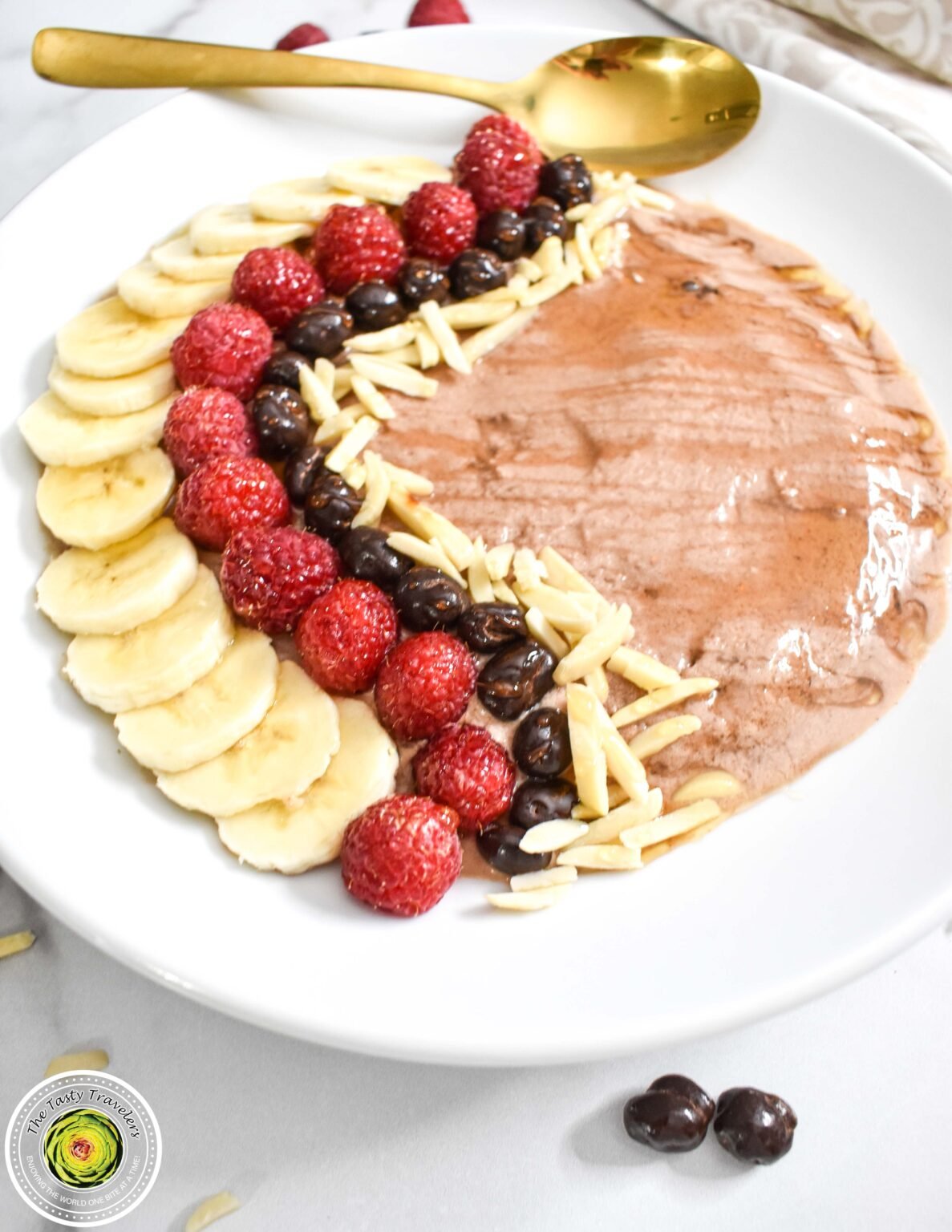 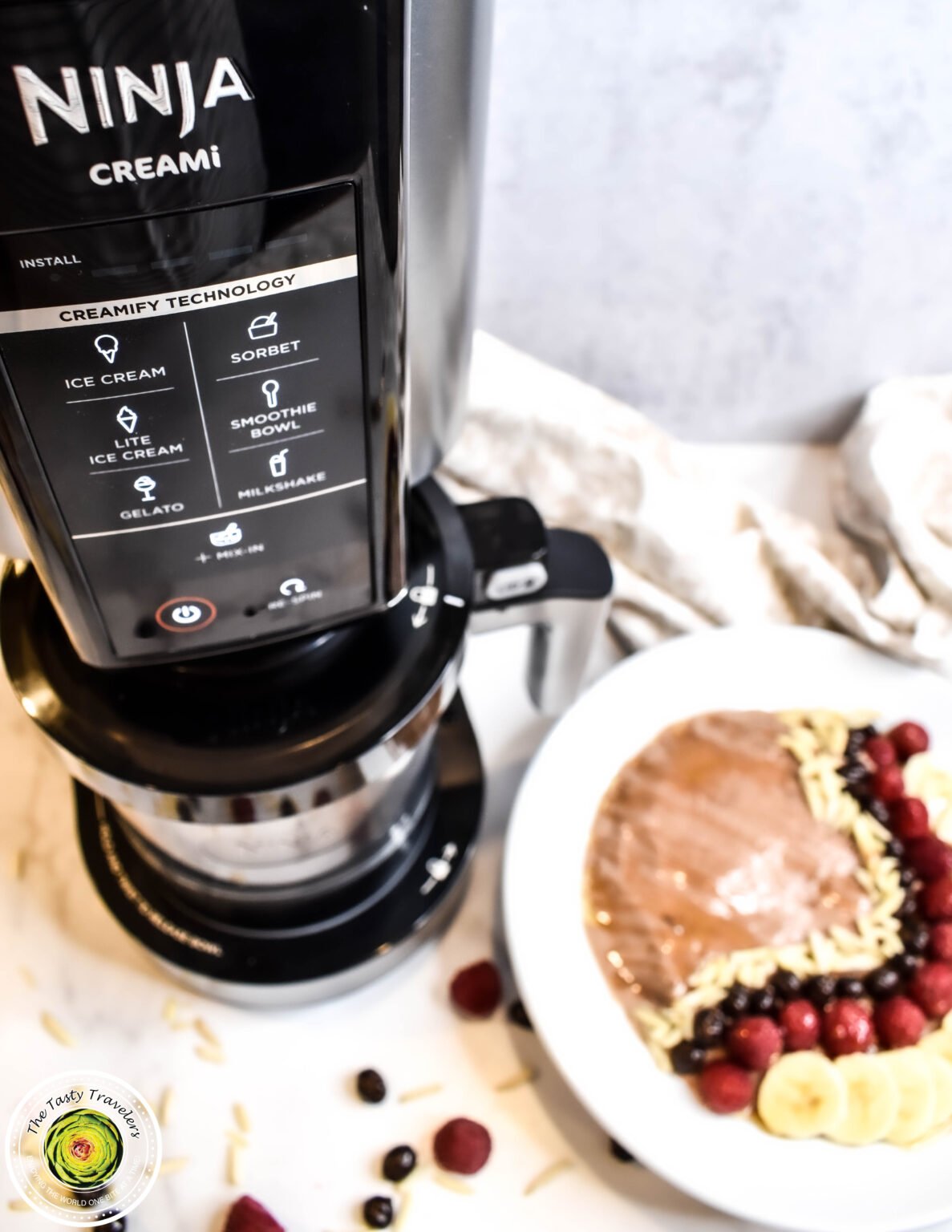 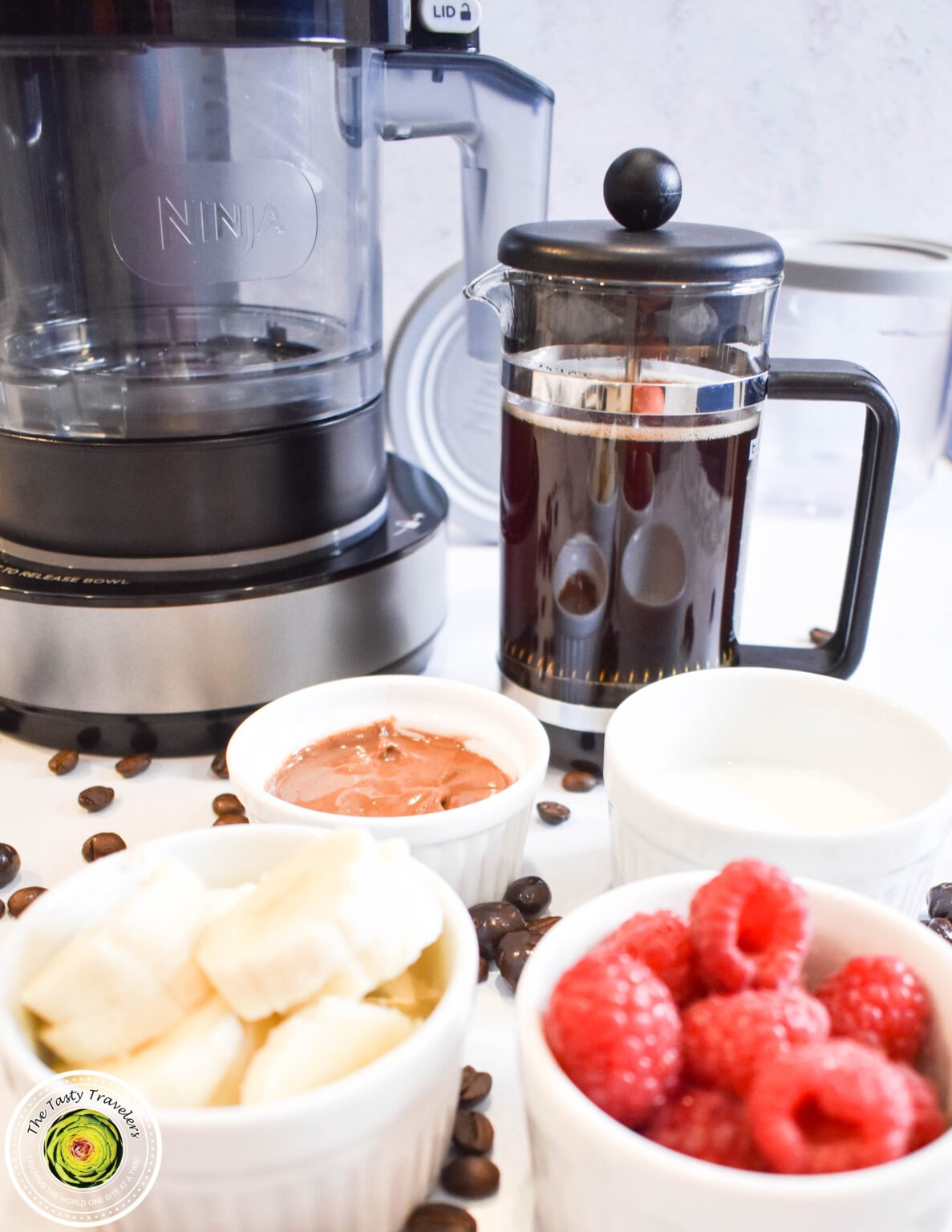 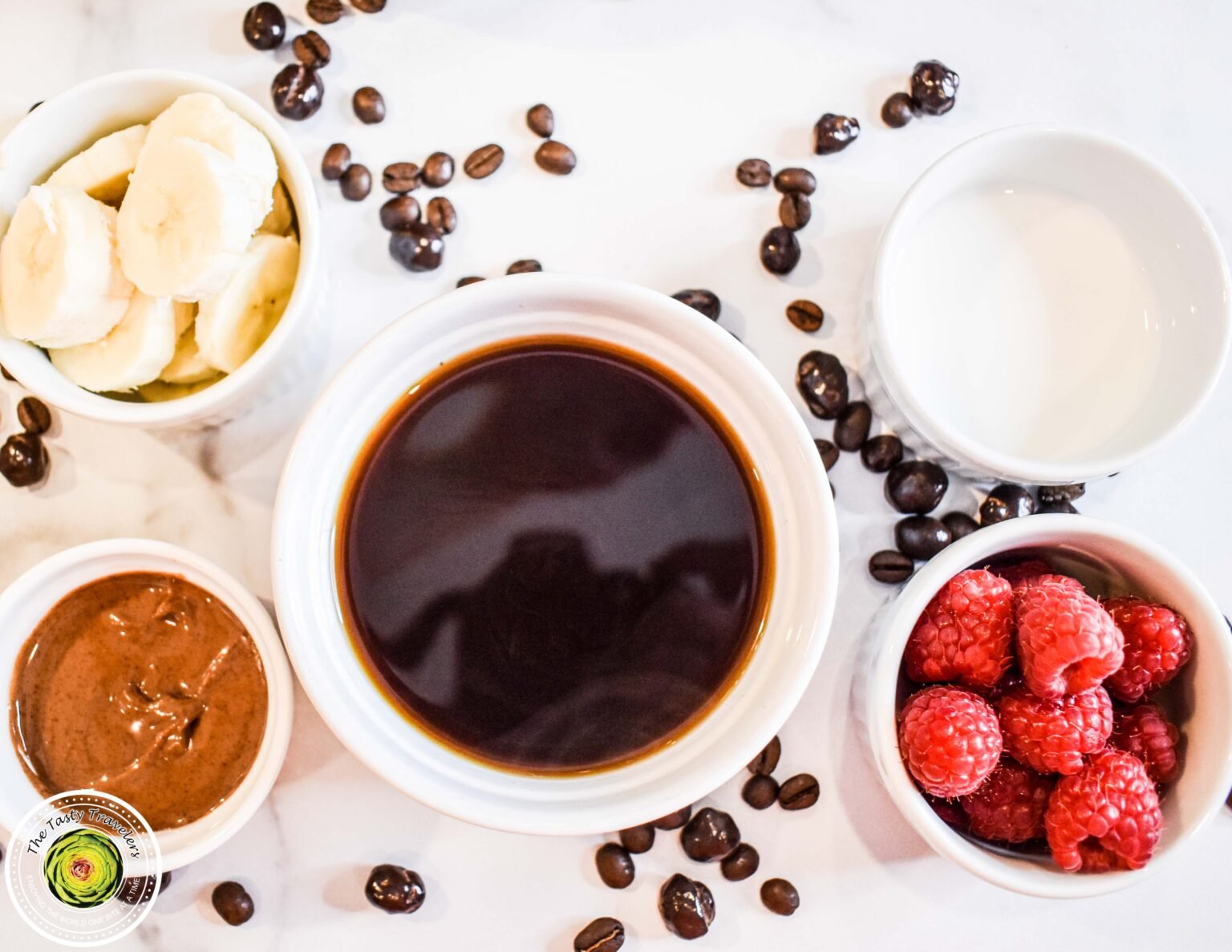 Coffee- Fresh brewed or pre-made coffee/iced coffee works for this recipe. Use a coffee blend that you would normally drink as a cup of coffee.

Oat Milk-Anytype of milk will work for this recipe. You can even use coffee creamer if desired.

Mocha Almond Butter- Feel free to use your favorite type of nut butter. The mocha almond butter that I used had a bit of a chocolatey flavor and was a bit on the sweeter side. Use your favorite!

Raspberries- Fresh berries are recommended. Blueberries, blackberries, or strawberries would be a nice substitute for raspberries.

Banana- If you don't like the taste of bananas, you can reduce the number of bananas in this recipe and substitute it with more berries. 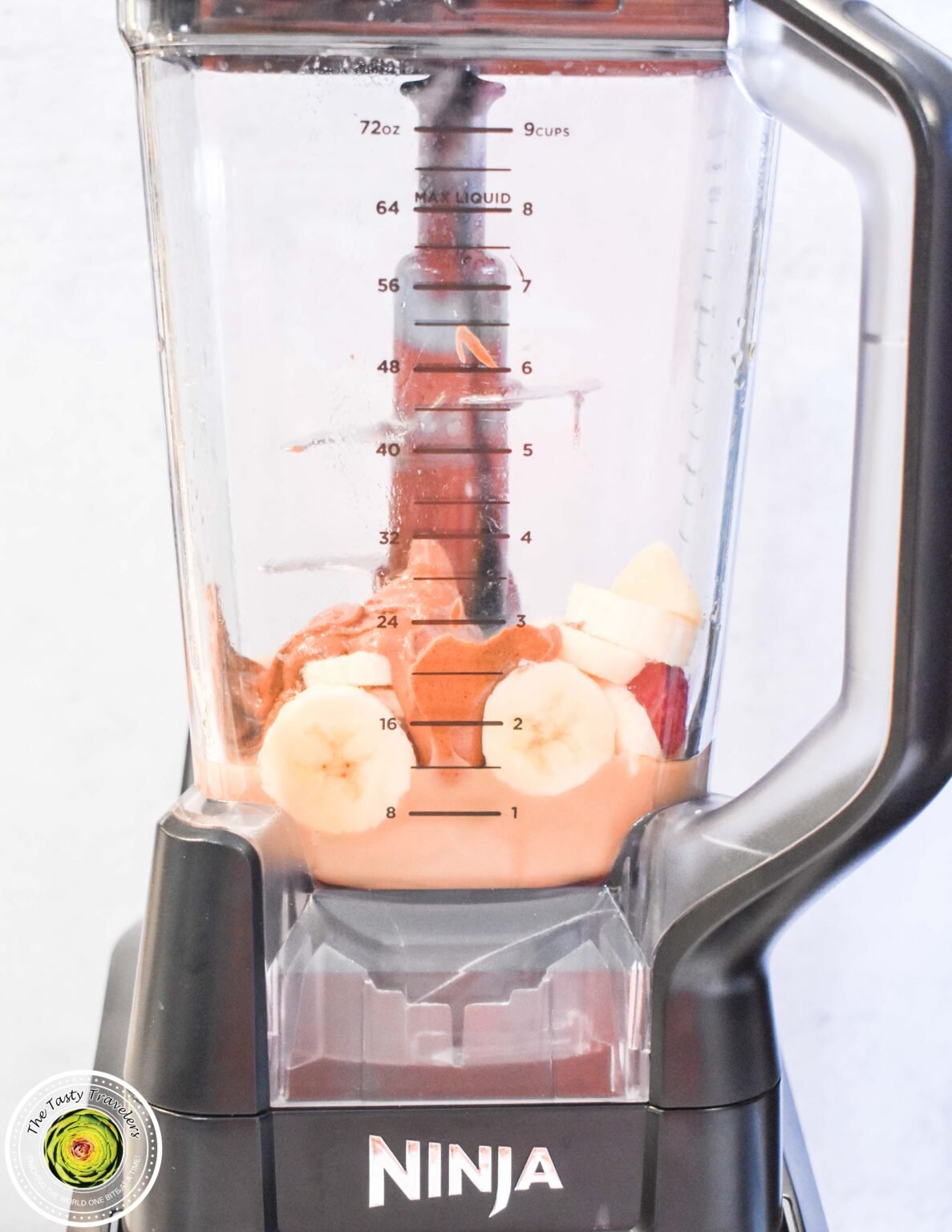 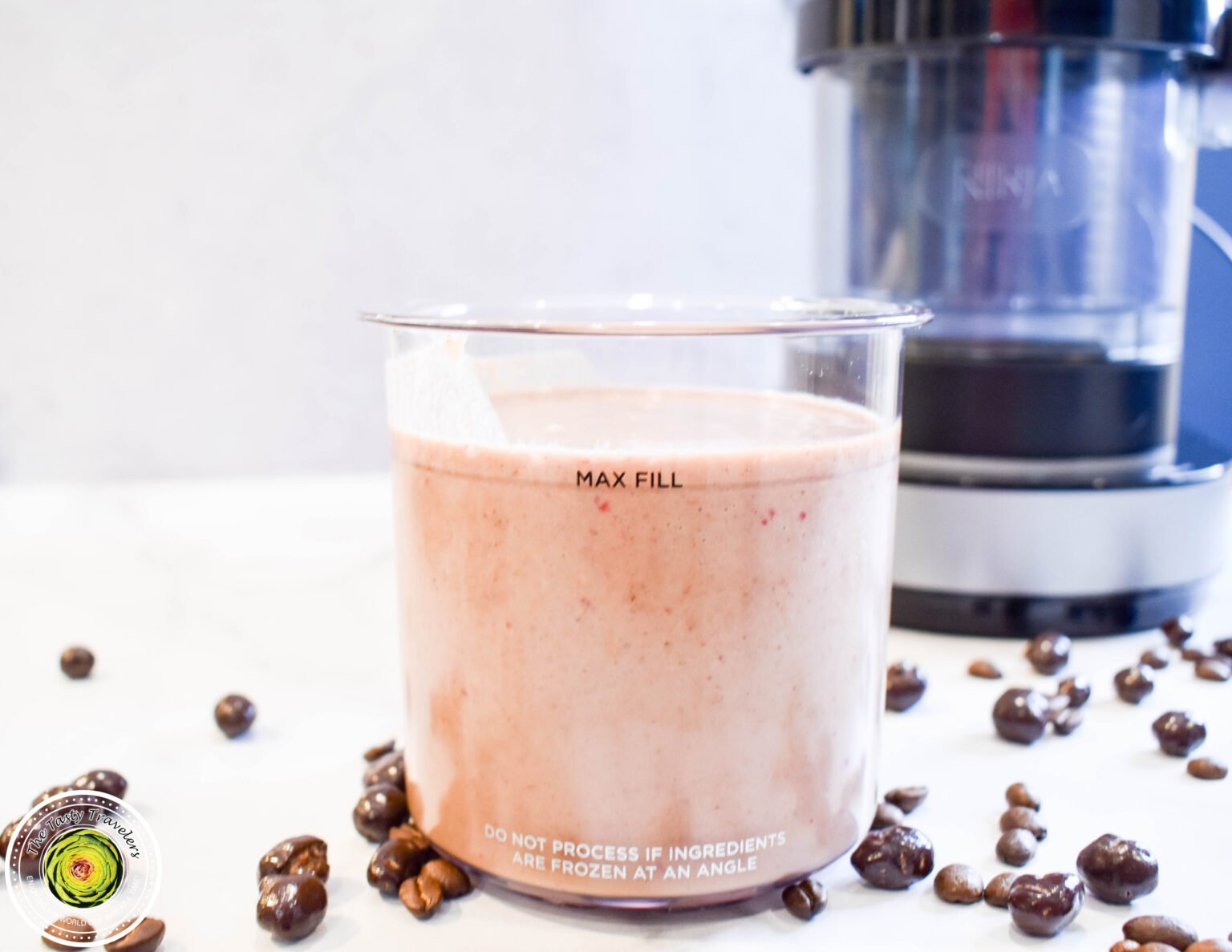 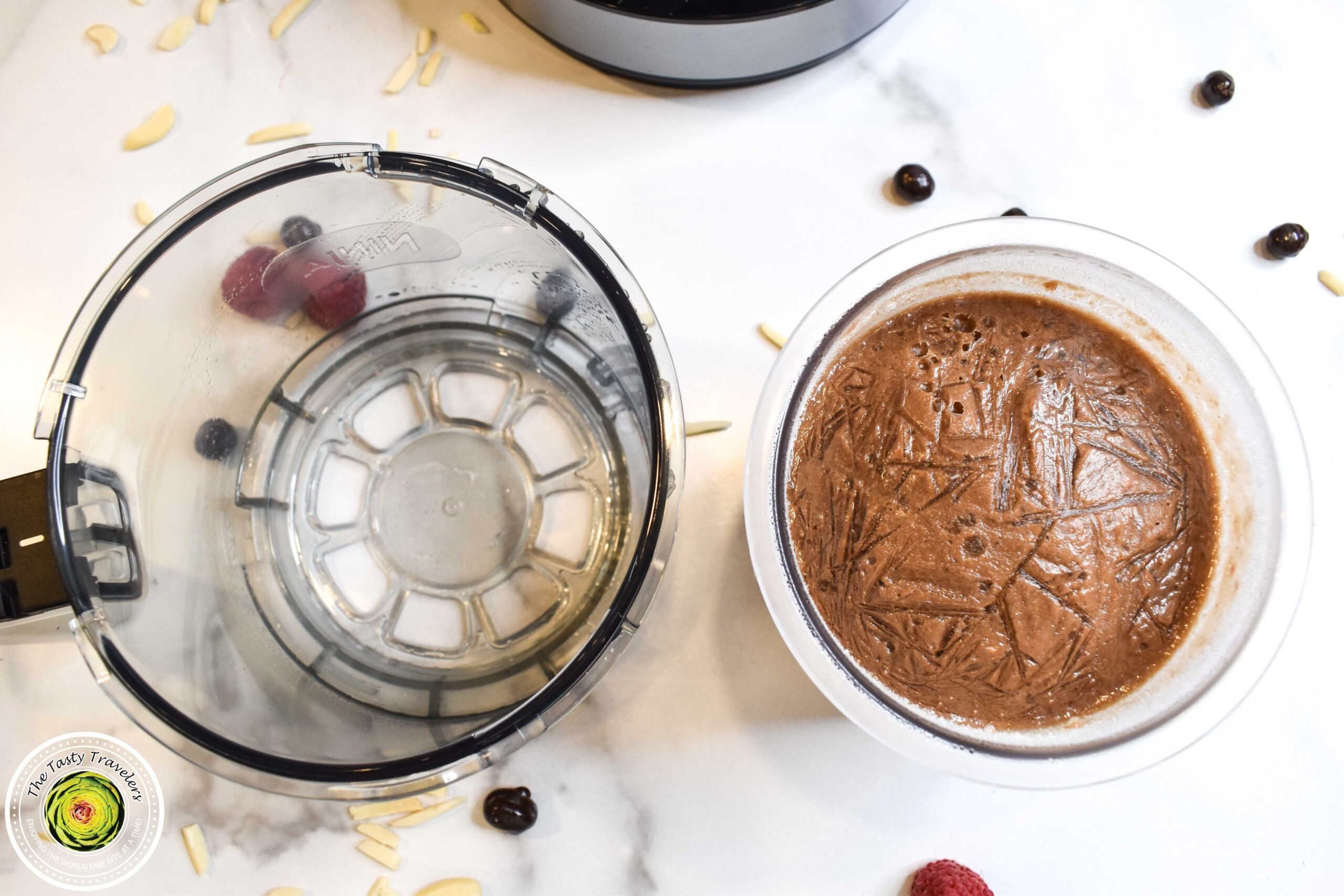 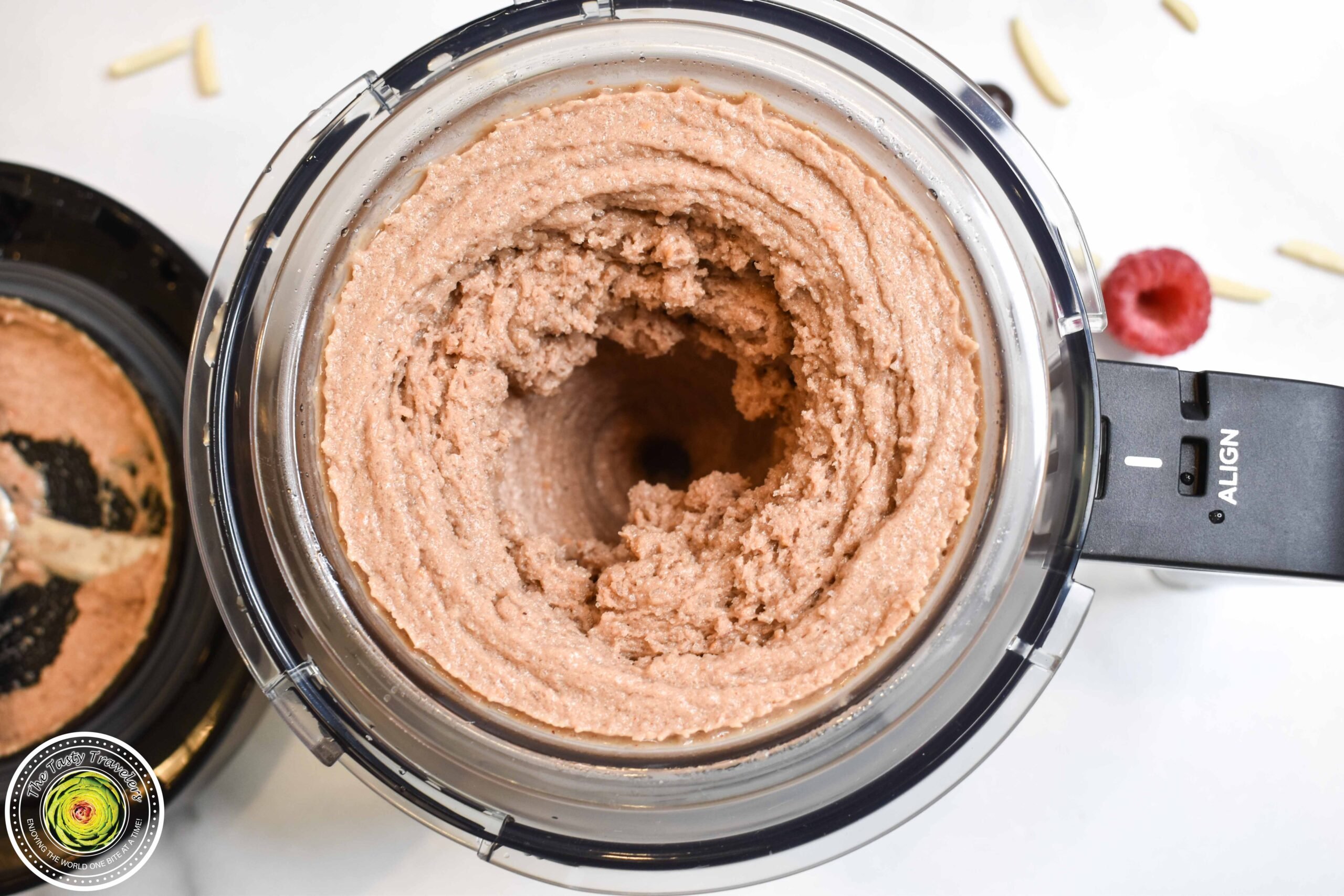 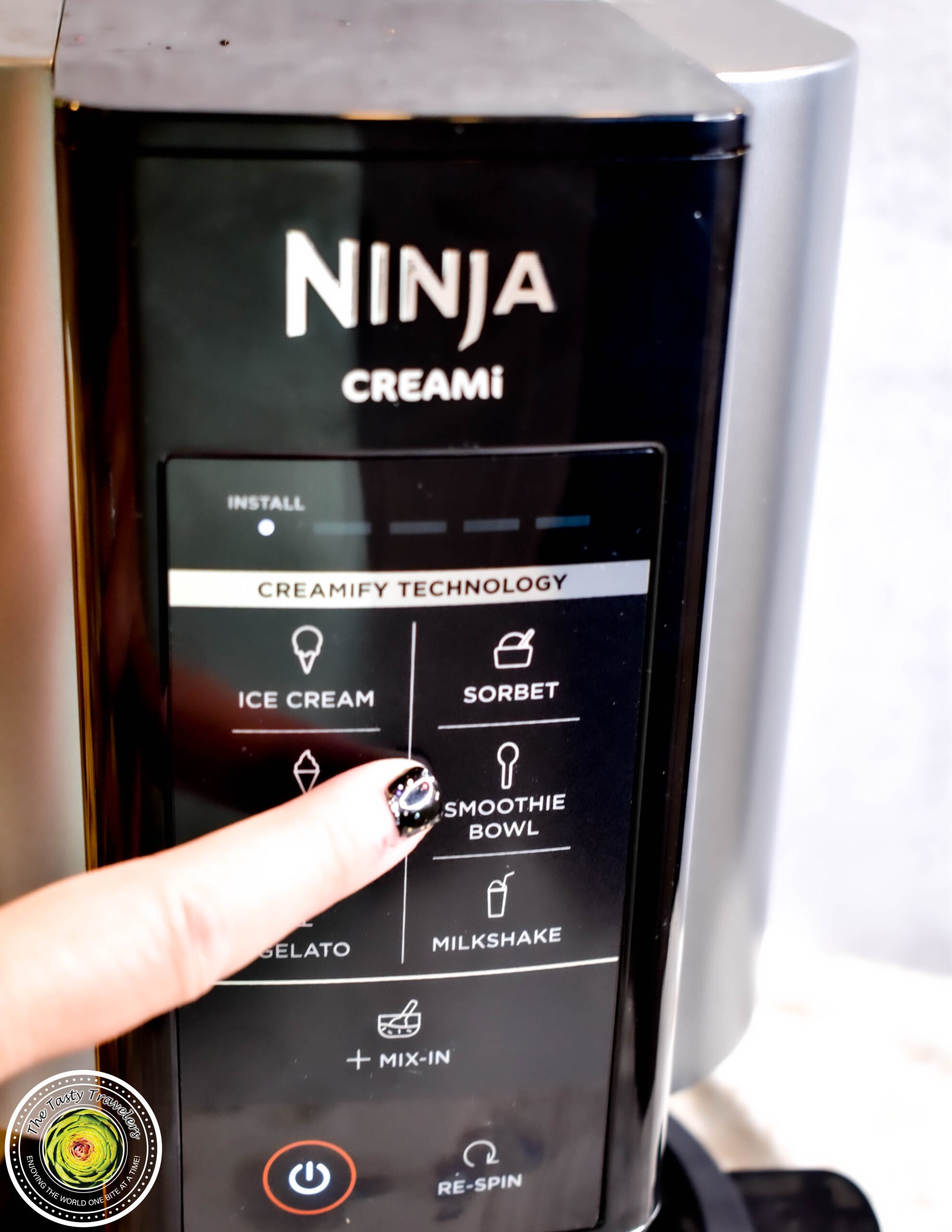 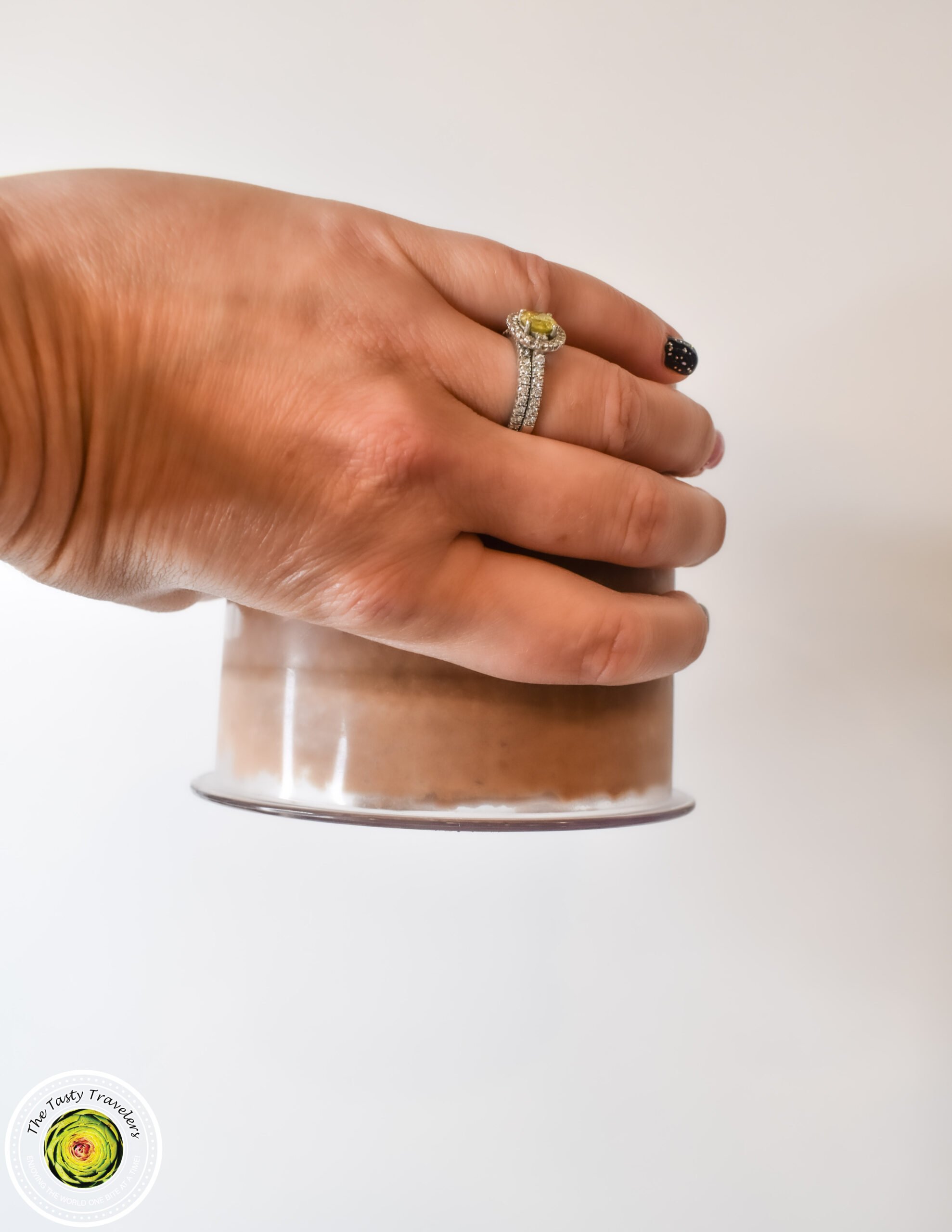 1.  Combine all ingredients in a blender and blend until smooth.

2.  Pour into an empty Ninja Creami pint container and freeze for 24 hours.

3.  After 24 hours, remove the pint from the freezer. Remove the lid.

5.  Once the smoothie function has ended, turn the outer bowl and release it from the Ninja Creami machine.

7.  Your smoothie bowl is ready to eat! Top with your favorite toppings and enjoy! 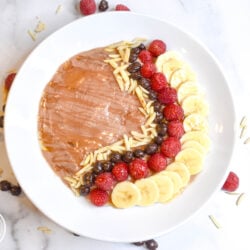 No ratings yet
Rate this Recipe Print Recipe Pin Recipe Save to Slickstream Favorites Saved!
Prep Time: 5 minutes
Freeze Time: 1 day
Total Time: 1 day 5 minutes
Servings: 1 Pint
Calories: 902kcal
Join our Facebook GroupCheck out The Ninja Foodi Community!
Submit Your Recipe!Do you have your own great recipe that you would like to see on The Tasty Travelers? Submit Your Recipe!!

Not Your Father's Old Fashioned