When I heard that Ninja was coming out with a frozen dessert maker.....I was SOOO EXCITED, I just had to try it!

Who else loves ice cream??? We sure do! Ice cream is the most commonly eaten dessert around our house. Luis absolutely loves all things that have raspberries in them, so I made raspberry ice cream and added in some white chocolate truffles. Thanks to the addition of a small amount of cream cheese in this recipe, it came out super creamy! 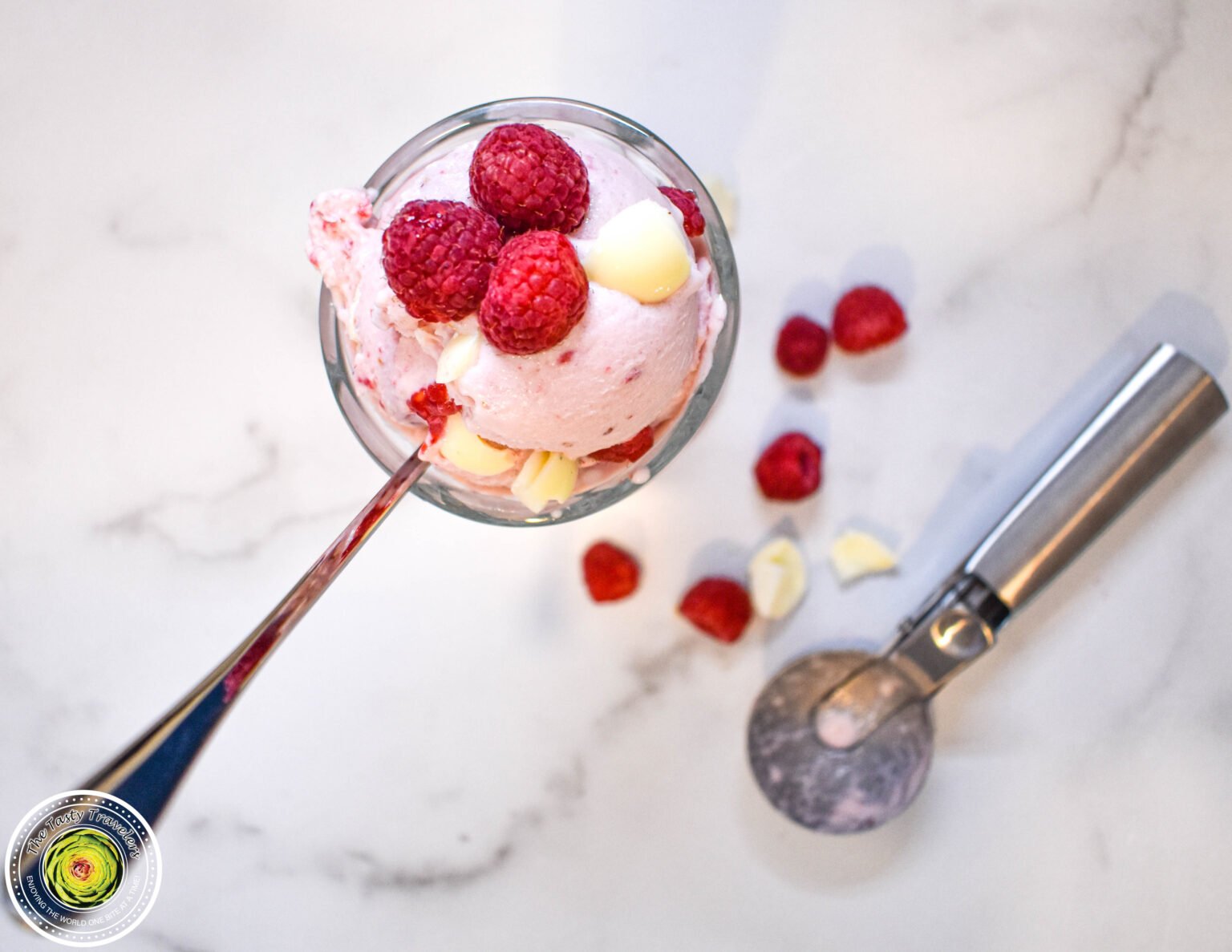 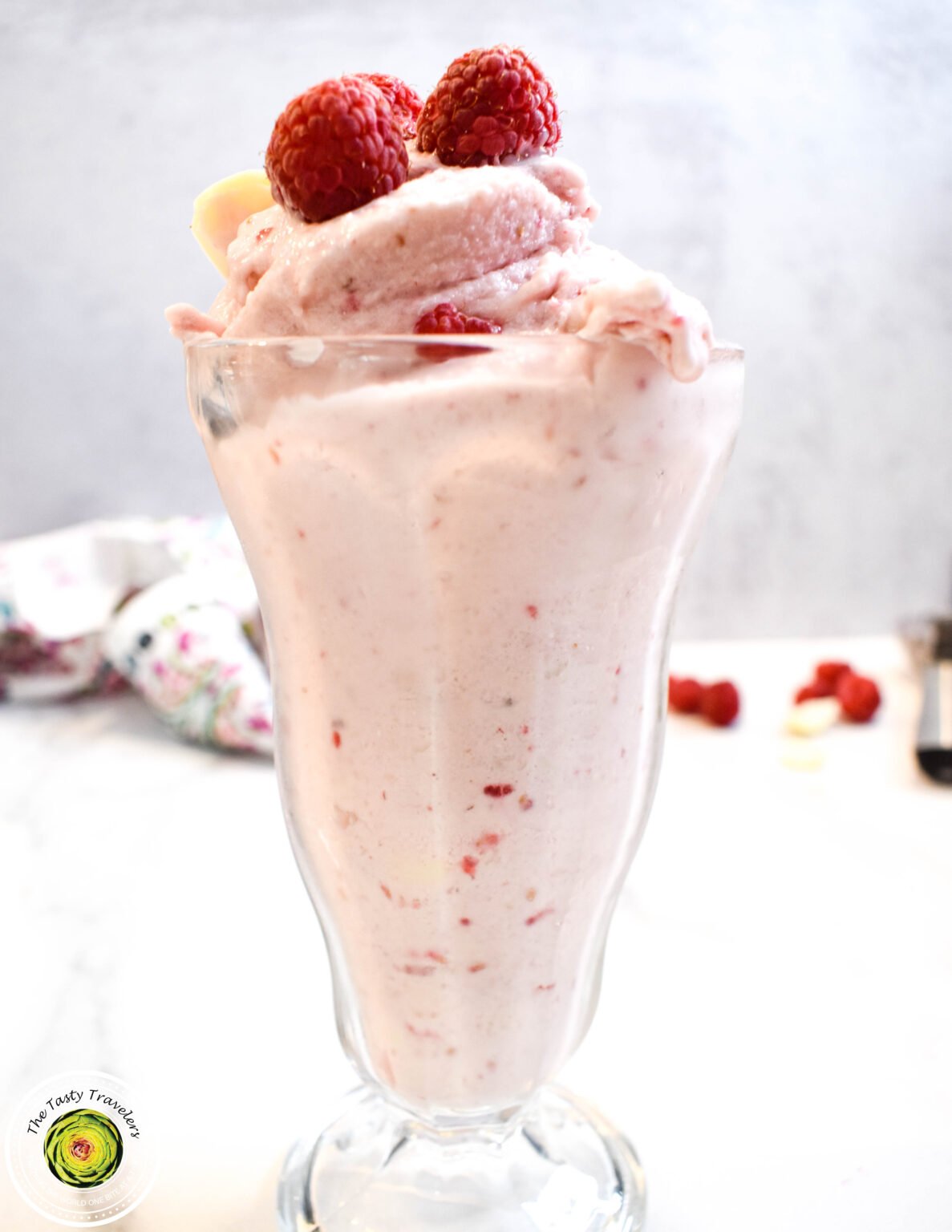 How do I make it taste even more like raspberries?

If you want to kick up the raspberry flavor a few notches, add in a small amount of raspberry extract. Extracts are very strong in flavor, so a little goes a long way. You can also use frozen raspberries instead of fresh ones. Frozen fruit tends sometimes has a more concentrated flavor than fresh fruit.

How do I get creamier ice cream with the Ninja Creami?

If you have made ice cream and it just isn’t quite as creami as you would like, you can very easily get it super creami by using the re-spin function on the Ninja Creami. Simply place the pint into the outer bowl and snap it into place. Choose the RE-SPIN function. Once the cycle completes, remove the pint and enjoy! Your gelato should be nice and creamy again. ***Use re-spin on already spun ice cream. If the ice cream has been spun and then frozen again, do not use re-spin, Instead, use the original process (ice cream, gelato, etc.)

Can I make this recipe vegan or dairy free?

Yes! Feel free to substitute the dairy for your favorite non-dairy milk.

You sure can! But...you will need to use 2 pint containers instead of one. You always want to make sure that the pint containers are only filled up to the max fill line and not any more than that. In order for the ice cream to turn out creamy, it needs to be mixed by the machine after freezing. If you overfill the pint, the machine is going to have a hard time mixing it and the result will not be as expected. It's ok if you go over the max fill line a little bit when adding in the mix-ins after the ice cream has already gone through the ice cream function.

How long can I freeze my ice cream for? 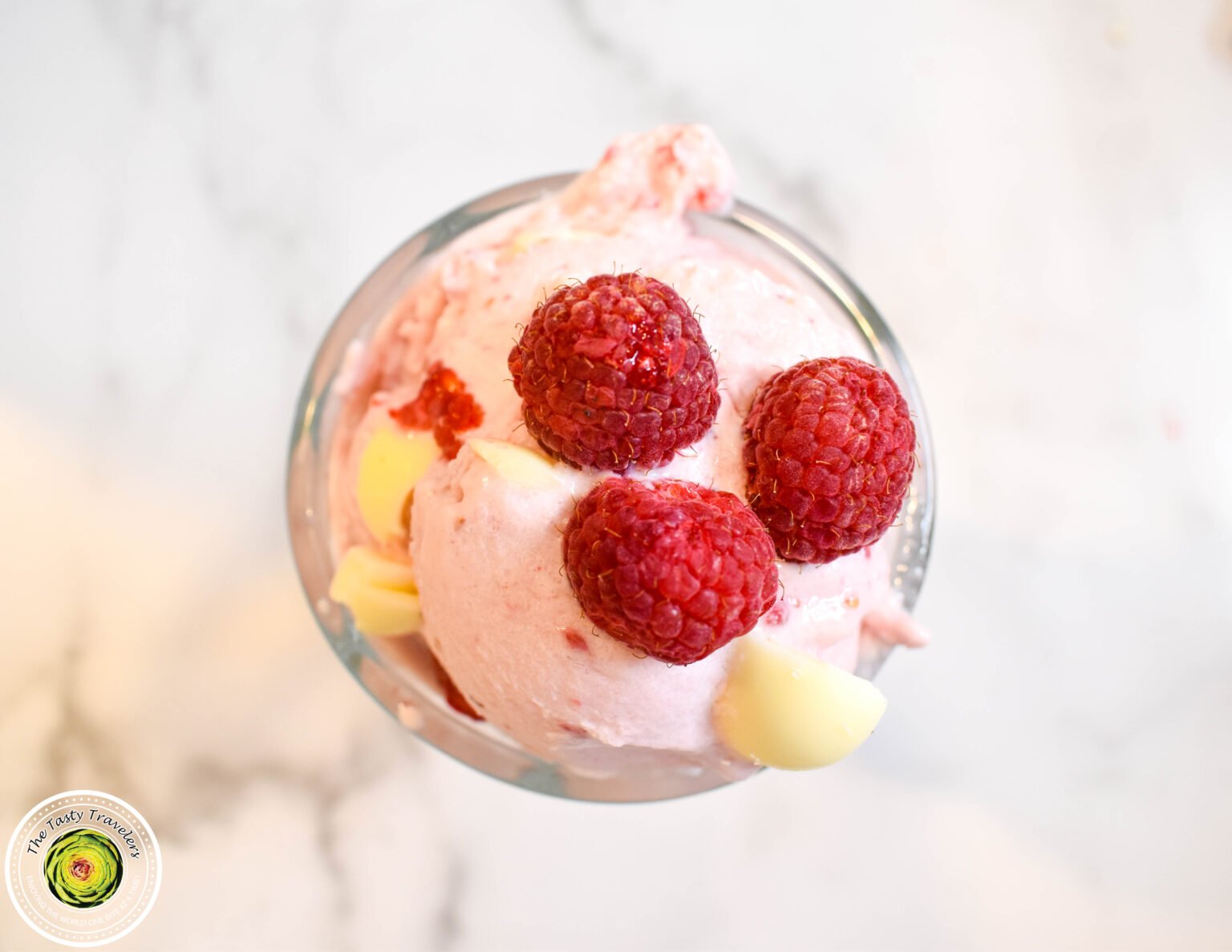 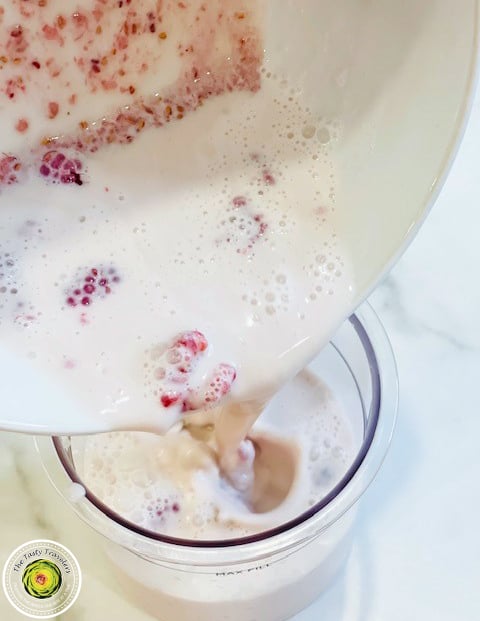 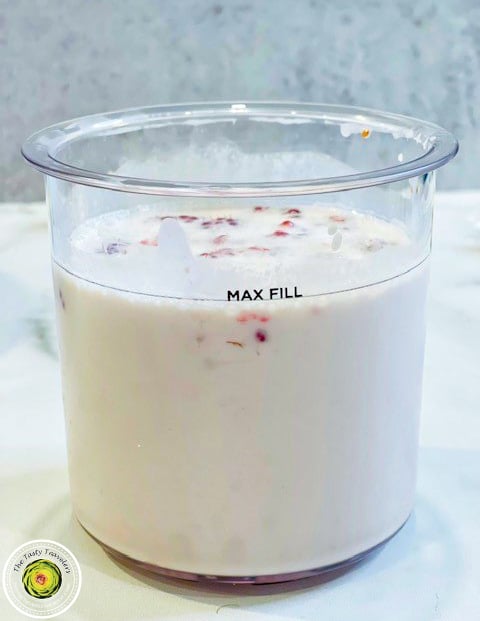 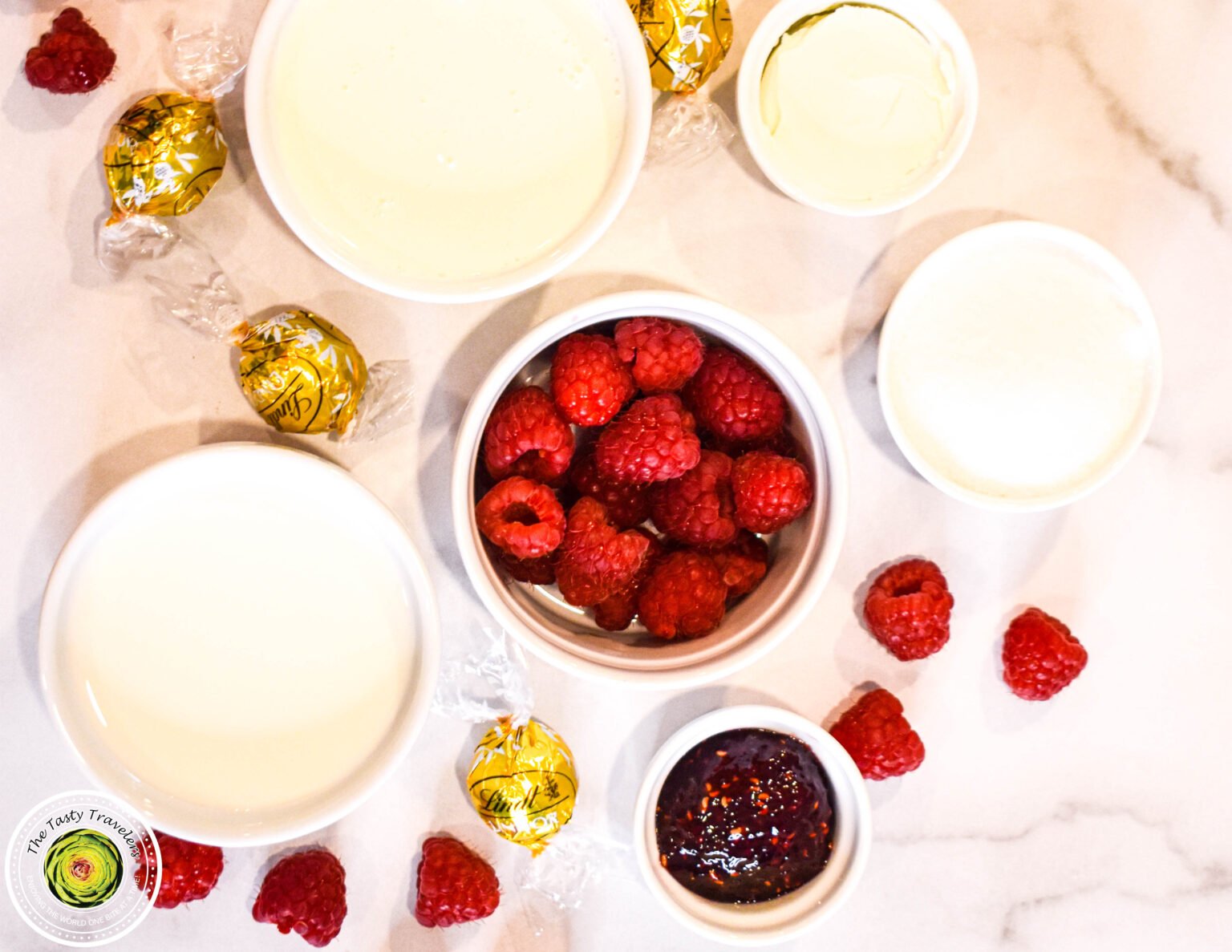 Sugar- Feel free to reduce or increase the sugar based on how sweet you would like the ice cream. If you decide to use a sugar substitute, such as monk fruit or agave sweeteners, use the LITE ICE CREAM function instead of the ICE CREAM function.

Raspberry Preserves - While I used raspberry preserves with seeds, you can use seedless, jelly, or jam instead.

Heavy Whipping Cream- The heavy whipping cream helps to add to the creaminess of the ice cream. If you prefer, you can use half and half or a lower fat option. The results will be less creamy.

Milk- I used whole milk but you can use lower-fat milk or a non-dairy option like oat milk, coconut milk or, almond milk.

Raspberries (Cut in half)- Fresh berries mix in really well but you can use frozen or substitute with a different fruit of your choice.

White Chocolate Truffles (Cut in quarters)- I used Lindt white chocolate truffles. Feel free to use any chocolates that you would like. Just be sure to cut them into small pieces that they mix in well. 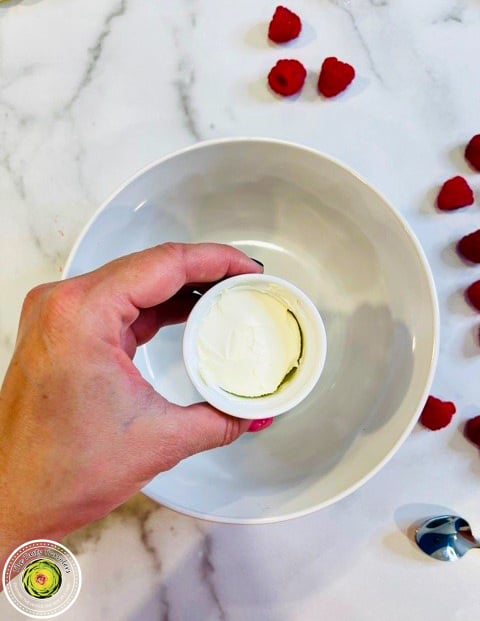 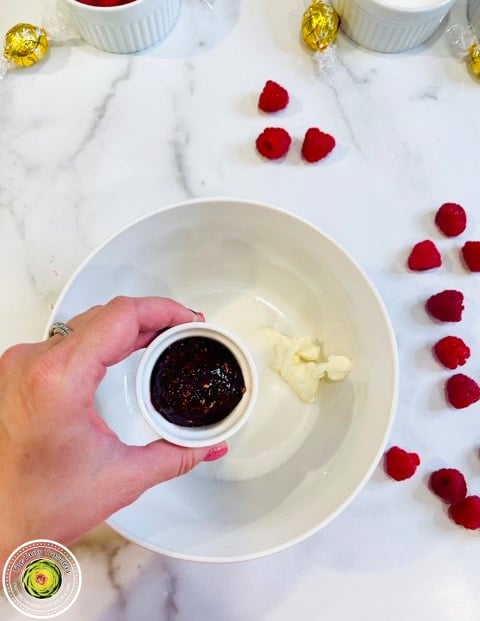 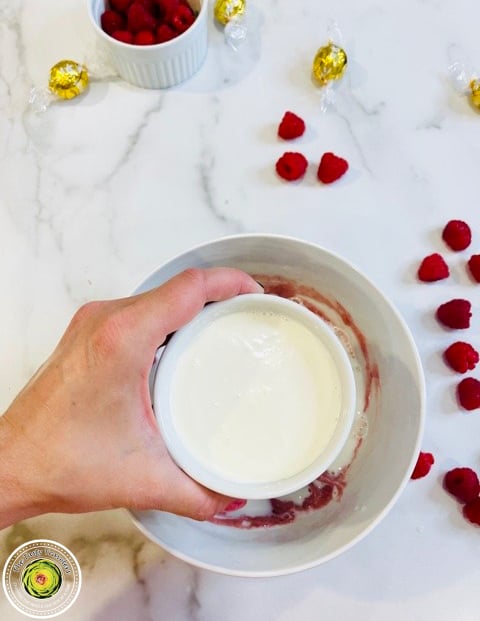 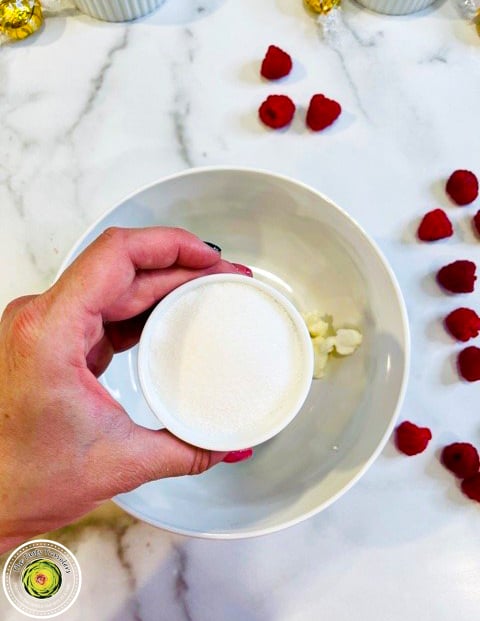 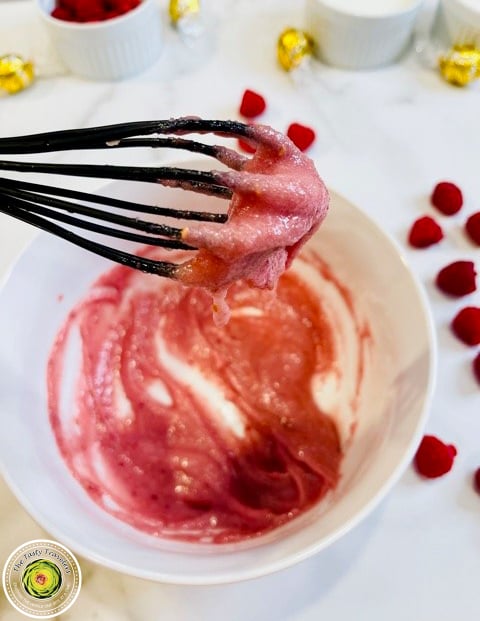 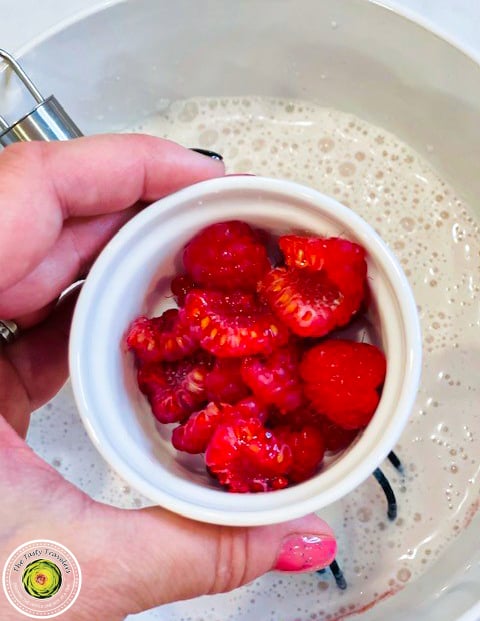 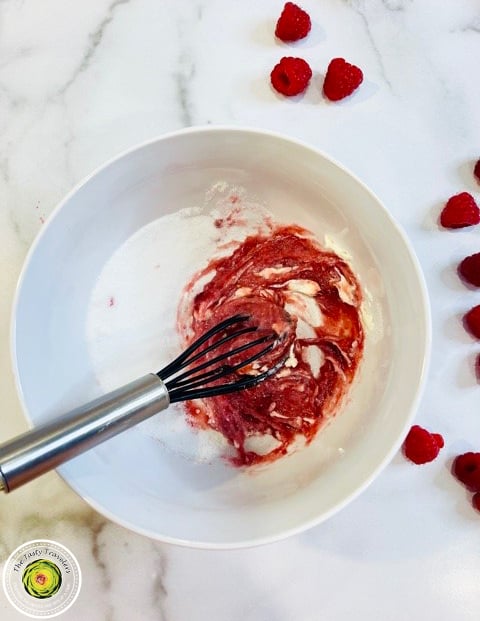 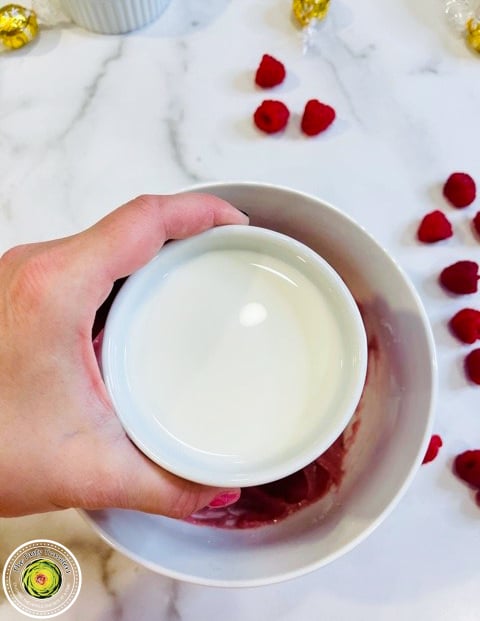 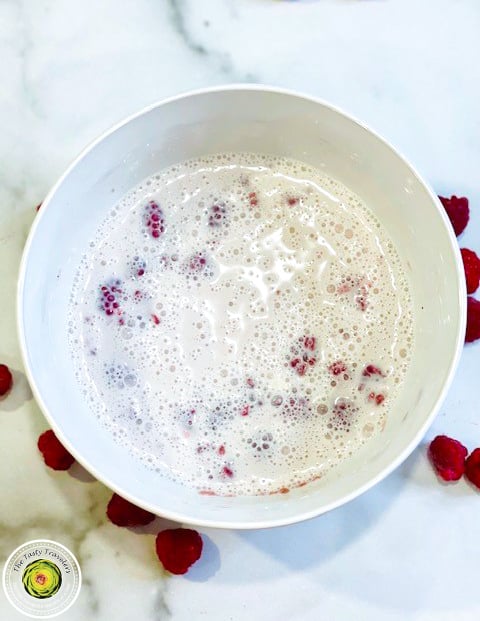 1. Combine the cream cheese, sugar, and raspberry preserves in a mixing bowl.

2. Using a whisk, mix together until all ingredients are fully combined and the sugar starts to dissolve.

3. Add in the heavy whipping cream and milk. Whisk until all ingredients have combined well. This may take a minute or two because the raspberry preserves mixture is quite thick.

4. Add in ½ of the raspberries that have been cut in half. This will be about 6-8 raspberries based on the size.

5. Once all ingredients have been added (except the mix-ins) pour into an empty Ninja Creami pint container and freeze for 24 hours.
After 24 hours, remove the pint from the freezer. Remove the lid.

7. Once the ice cream function has ended, turn the outer bowl and release it from the Ninja Creami machine.

8. Using a spoon, create a hole through the center of the ice cream that goes from top to bottom. This hole is where you will add the mix-ins. Add in the ¼ cup of raspberries and 3 white chocolate truffles. Be sure to cut the raspberries in ½ and the truffles in ¼. These mix-ins will not get broken into smaller pieces during the mix-in function so you want to make sure they are in pretty small pieces.

9. Place the outer bowl with the pint back into the Ninja Creami machine and lock it into place. Choose the MIX-IN function.

10. Once the Ninja Creami completes the MIX-IN cycle, remove the outer bowl from the machine. 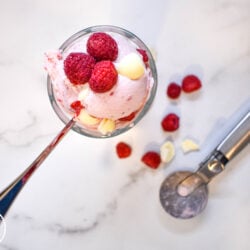 5 from 2 votes
Rate this Recipe Print Recipe Pin Recipe Save to Slickstream Favorites Saved!
Prep Time: 5 minutes
Freeze Time: 1 day
Total Time: 1 day 5 minutes
Servings: 1 Pint
Calories: 1389kcal
Join our Facebook GroupCheck out The Ninja Foodi Community!
Submit Your Recipe!Do you have your own great recipe that you would like to see on The Tasty Travelers? Submit Your Recipe!!